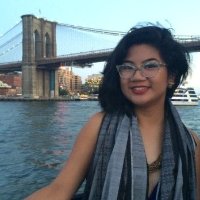 Previously she worked at New Orleans Workers' Center for Racial Justice (NOWCRJ), Office of the Attorney General of the State of New York, National Union of Peoples' Lawyers.[1]

March 2009, Jackelyn Mariano, a protester from Hunter College said, “CUNY is made up of working-class students and students of color who really can’t afford to go anywhere else. It was supposed to be free when it opened up, and tuition has been increasing ever since” [2].

In 2011 Jackelyn Mariano was a contact for the National Lawyers Guild student chapter at CUNY Law School.

"From the Bronx to Mindanao"

This panel examines the ecological impact of neoliberalism in advanced industrialized and developing countries through the experiences in the Bronx in New York City and in Mindanao in the Southern Philippines, as well as the development of people's response and resistance in both countries.

On October 28, 2013, a City College administrator suspended Tafadar Sourov and Khalil Vasquez, two students who led demonstrations against the administration’s illegal raid and seizure of the Guillermo Morales / Assata Shakur Community Center. The Morales / Shakur Center is a space that has existed at City College for more than 20 years and was first won in 1989 through a mass student strike and occupations throughout CUNY.

In response to the attacks on our student leaders, students and community say: WE ARE NOT AFRAID. Repression will not end the campaign to save the Morales / Shakur Center or the broader struggle to liberate CUNY for the people. Hundreds on campus and in the community will follow their example. Any punitive measures against Taffy and Khalil will only be a lesson to the people that the CCNY administration dismisses the people’s concerns and that the people must escalate their mass actions.

Taffy and Khalil are fighting for the people, defending the last autonomous campus space that serves the community and defending the legacy of the people’s revolutionary heroes. THE PEOPLE MUST DEFEND TAFFY AND KHALIL. The people cannot stand aside and look as the City College administration attempts to isolate them and promote fake sellout student leaders who want to negotiate away the Center. The Center was won through struggle and will be reclaimed through struggle.

Revolutionary Student Coordinating Committee organised a meeting in Edgewater, 160 Convent Avenue,New York, Friday 8 November 2013, to organize resistance. Those indicating their willingness to attend on the Whenever website included Jackelyn Mariano.[4]