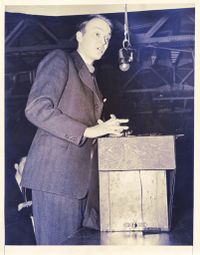 Outside the known leadership of the Communist Party USA, the five top pro-Soviet propagandists in US were all Protestant clergymen. Their names and positions are as follows: the Rev. Harry F. Ward, Professor Emeritus of Union Theological Seminary; the Rev. Kenneth Ripley Forbes, Executive Secretary of the Episcopal League for Social Action; the Rev. Jack R. McMichael, Executive Secretary of the Methodist Federation for Social Action; the Rev. Willard Uphaus, Co-Director of the American Peace Crusade; and the Rev. Joseph Fletcher, Professor of Christian Social Ethics, Episcopal Theological School, Cambridge, Mass.

The Rev. Joseph Fletcher and the Rev. Willard Uphaus were elected to membership on the World Peace Council at the Second World Peace Congress, held in Communist-controlled Poland, November 13-19, 1950. This gathering had been scheduled to meet in Sheffield, England; but, at the last minute, the British Government refused to allow the foreign delegates to land in England. The gathering was, thereupon, transferred to Warsaw. [1]

Jack R. McMichael was a sponsor of the Scientific and Cultural Conference for World Peace which ran from March 25 - 27, 1949 in New York City. It was arranged by a Communist Party USA front organization known as the National Council of the Arts, Sciences, and Professions. The conference was a follow-up to a similar gathering, the strongly anti-America, pro-Soviet World Congress of Intellectuals which was held in Poland, August 25 - 28, 1948.[2]