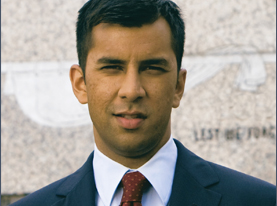 J. Ashwin Madia was a Democratic nominee for the U.S. House of Representatives for Minnesota's 3rd Congressional District.

Madia received $6,000 in lobbying funds from Planned Parenthood in 2008.

As at September 3, 2010, Madia served as a Vice-President of VoteVets.org.[1] He also received $10,000 from the organization in 2008 for his run for Democratic Representative for Minnesota.[2] VoteVets.org is a Veterans advocacy group. Its PAC states that it seeks to elect Iraq and Afghanistan Veterans to public office – "regardless of party". However from 2006 - 2010 the organization has donated $15,100 to the Republican Party and $228,700 to the Democratic Party.