Difference between revisions of "Helen Rivas" 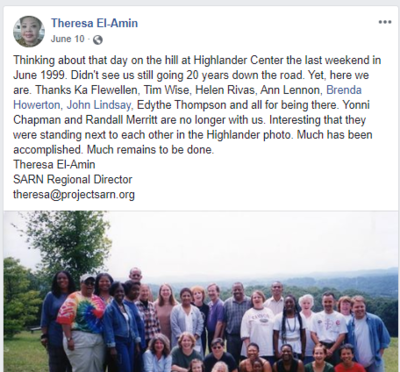 Thinking about that day on the hill at Highlander Center the last weekend in June 1999. Didn't see us still going 20 years down the road. Yet, here we are. Thanks Ka Flewellen, Tim Wise, Helen Rivas, Ann Lennon, Brenda Howerton, John Lindsay, Edythe Thompson and all for being there. Yonni Chapman and Randall Merritt are no longer with us. Interesting that they were standing next to each other in the Highlander photo. Much has been accomplished. Much remains to be done.