Difference between revisions of "Earl Hilliard" 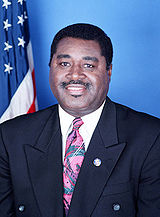 Template:TOCnestleft Earl Hilliard is a former Democratic Congressman from Alabama.

On February 18 1999, six members of the U.S. Congressional Black Caucus visited Cuba to evaluate the U.S.-imposed embargo. Among the visitors: Maxine Waters and Barbara Lee of California, Sheila Jackson-Lee of Texas, Julia Carson of Indiana and Gregory Meeks from New York and Earl Hilliard of Alabama [Vice Chair, CBC].

Representative Maxine Waters, who headed the delegation, stated that many of the congressional representatives already have some information about Cuba. But she hoped that additional facts would help the Black Caucus take a leading role in introducing legislation to change current U.S. policies toward Cuba.

Jorge Lezcano, President of the International Relations Commission of the Cuban Parliament, received the U.S. congressional representatives upon their arrival in Havana. Lezcano told reporters that the visiting members of the Congressional Black Caucus plan to meet with Cuban lawmakers and other government officials. He added that during their stay on the island, the U.S. delegation will also visit places of cultural and historic interest.[3][4][5]

The legislators' visit was organized by the US based Pastors for Peace, headed by the Rev. Lucius Walker, who accompanied the delegation. They have organized several aid "caravans" in the United States to collect supplies and take them to the island.

On Thursday, February 18th, the group met with Cuban Foreign Minister Roberto Robaina and held a question and answer session with him. The Cuban domestic news agency AIN said the encounter covered Washington's "aggressive policy" toward Cuba and the effects of the long-running U.S. economic embargo against the communist-ruled island. Robaina also talked about what he called the "enormous misinformation" about Cuba in the mainstream U.S. media.

Late Friday, February 19th, the group met with President Fidel Castro for 6 hours. There have as yet been no details on the meeting in the Cuban press. Vice President Carlos Lage and Ricardo Alarcon, president of the parliament, were also present.[6]

In 1998 Earl Hilliard Democrat was listed as a member of the Congressional Progressive Caucus.[7]

Progressive State of the Union Address, 1999

January 19, 1999, members of the Congressional Progressive Caucus, and Institute for Policy Studies, talked about issues that they are planning to address in the upcoming year, at the Progressive State of the Union Address. Some of the issues they intend to address are poverty in the United States, national defense, the global economy, Medicare, and education. Rep. Conyers stated that the House disregarded the views the majority of the American people when the House impeached the president.

Caucus Chair Rep. Peter DeFazio(D-OR) stated "The Progressive Caucus Alternative State of the Union will provide a much needed reality check to politicians who would rather ignore the priorities of Americans left out of the economic boom -- priorities like access to quality health care and education, repairing crumbling schools, addressing the growing gap between the rich and poor, and creating a sustainable global economy that works for everyone, not just the corporate architects."

The Congressional Progressive Caucus, Chaired by Rep. Peter DeFazio (D-OR), consists of over a quarter of the House Democrats, one Independent and Senator Paul Wellstone. The Caucus will be releasing position papers on Health Care and Income Inequality, with reports on the Alternative Federal Budget, Social Security, Minimum Wage, Education and the Global Economy.

In February 2000, Frederick Zylman from the office of Congressman Earl Hilliard spent six days in Havana, Cuba, for the purpose of "information gathering". The trip cost $1,478.47 and was paid for by the Christopher Reynolds Foundation.[10] Zylman was a former member of the Communist Party USA and at the time of the Cuba trip was active in the Committees of Correspondence for Democracy and Socialism.