Template:TOCnestleft Durham People's Alliance is based in Durham, North Carolina.

In the 1970s there was a major organizing campaign at Duke Hospital in Durham, N.C. The Duke family made their money in tobacco, later expanded into the electric power industry and eventually endowed Duke University. Meanwhile, Howard Fuller and other Durham activists in the mid-1960s had generated a variety of local organizations, such as Malcolm X Liberation University and the Student Organization for Black Unity. When these and other organizations all jelled at a national level into the African Liberation Support Committee in 1972, Durham’s leaders were influential in this national movement. The ALSC had a strong Southern base, but also had action based outside the South.

The Revolutionary Workers League, a national Black communist pre-party formation, had a strong chapter in Durham that grew out of the ALSC through Black Marxist study groups. The white student movement was also moving towards radical and Marxist politics. In Durham in 1972-73 white activists formed two collectives — a health collective and a socialist feminist collective — both affiliated with the communist-oriented New American Movement. In 1973, the health collective became the Durham Organizing Committee. The DOC later split, some members entering a Marxist-Leninist collective and others, critical of a lack of democracy, formed the Durham People's Alliance.

By 1975, Black activists in RWL and white activists in DOC were moving in parallel, forming a joint study group and a strategy committee to discuss a union drive at Duke Hospital. Both agreed on the importance of unity of Black and white workers and both had members who were worker leaders in the union efforts. Later, DOC became the Communist Workers Party.[1]

The top three finishers — Jillian Johnson, Charlie Reece and Javiera Caballero — currently serve on the council. They had a wide margin of victory over the next three candidates, who also advanced to the municipal general election Nov. 5 for the three at-large seats on the council.

But turnout was light, with only 13% of voters in the city casting ballots.

Johnson, Reece and Caballero decided in the spring to run under the banner of “Bull City Together.” Their bloc — a man, an African American woman and a Latina — exhibits diversity in a city that upholds that cause, they say.

It paid off with endorsements from the politically active Durham People's Alliance and the Durham Association of Educators.

“I think people saw our platform and it resonated with them,” Johnson said. “They’re excited about the work Charlie, Javiera and I have done in Durham and are preparing to do over the next four years.”

“We’re getting more people involved with city government,” she said. “I’m excited to see that we’re trying to me a more open, more accessible and more democratic city government.”

Reece and Johnson, who are seeking their second terms, were first elected in 2015. Caballero, the first Latina on the council, is running for the first time after being appointed in 2018 to finish Steve Schewel’s unexpired term when he became mayor.

Daniel Meier, an attorney who finished sixth, said he still thinks the next election is anybody’s race.

“The problem is turnout,” he said.

Everyone assumes that the Durham People's Alliance controls the election, he said.

What they don’t realize is that the PA controls about 6 percent of the vote, he said, and in an election in which 10% of the population votes that is significant.

“We need to get the other 90 percent of the people energized,” Meier said.

While Gunn did not get the endorsement of the People’s Alliance, there was support for him within the group at the lengthy Aug. 21 endorsement meeting, enough that a board member believes he may have jeopardized his position in the group Tuesday.

Delvin Davis, who is the PAC Liaison, announced his support for Gunn on the morning of the election in a public Facebook post. The group recently adopted bylaws against leaders breaking with the organization’s announced endorsements, he said.

“I chose to vote for was Joshua Gunn, even though he wasn’t endorsed by the Durham People's Alliance, a group that organizes for progressive issues and candidates,” the post said.[2]

The Durham People's Alliance Board, 2016.

In 2014, the Durham People's Alliance, one of the city’s big-three political groups, endorsed Freedom Road Socialist Organization member Sendolo Diaminah in his run for Durham Public schools Board.

Sendolo Diaminah for the District 2 DPS seat held by Fredrick Davis, who decided not to run again. PA considers Diaminah thoughtful and articulate, with an eye toward issues related to housing, poverty and teacher rights. The group thinks he can bring a fresh point of view to closing the achievement gap for children of color and those struggling with poverty.[6] 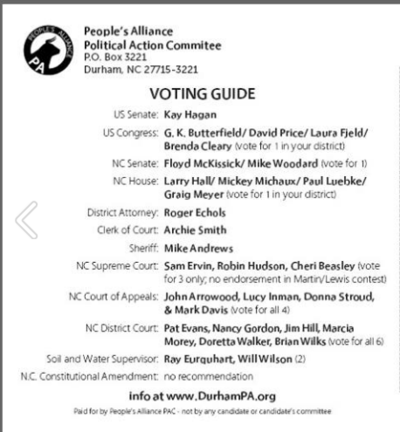