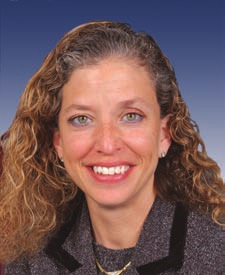 Debbie Wasserman Schultz is a Democratic member of the United States House of Representatives, representing the 20th district of Florida. She serves as the Majority Deputy Whip

The Council for a Livable World, founded in 1962 by long-time socialist activist and alleged Soviet agent, Leo Szilard, is a non-profit advocacy organization that seeks to "reduce the danger of nuclear weapons and increase national security", primarily through supporting progressive, congressional candidates who support their policies. The Council supported Debbie Wasserman Schultz in his successful House of Representatives run as candidate for Florida.[1]

In September 24, 2010, the Committee of Veterans of Foreign Wars endorsed Debbie Wasserman Schultz for office.[2]

Wasserman Schultz received $1000 in lobbying funds from Planned Parenthood in 2008.

Wasserman Schultz has been supported by EMILY's List during her campaigning.