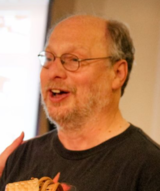 David Grosser became active against the Vietnam War in the 1960s. In 2011, he was active in Boston CISPES, the campaign to cut the military budget by 25%, and was a member of Solidarity.[1][2] He is now a member of the Boston DSA Internationalism Working Group. [3]

As the East Coast Development Coordinator, David works with our fundraising team and is responsible for outreach to our donors in the northeast. He got his start in solidarity with the people of El Salvador as a Sister City activist during the country’s Civil War. David then got involved with CISPES and worked as the Boston chapter’s local organizer in the mid-90s. After the neoliberal destruction of university education made his original career goal of becoming a history professor impossible, David chose to get his revenge by helping to build the internationalism necessary to bring down the US Empire.[4]