Difference between revisions of "Center for Marxist Education"

The original Center for Marxist Education was set up in New York City about August 6, 1969, and incorporated on Jan. 14, 1970, after the Party's convention wherein it adopted a resolution establishing such a place. The U.S. government's Subversive Activities Control Board held hearings on a petition filed July 17, 1970, by the Attorney General designating the CME as a Communist Party USA "front organization."

The SACB held its hearings on the CME and made a finding on March 14, 1973, that the CME was a "communist front organization" and ordered it to register with the government as such. A reproduction of the Final Report, with many details about the CME and its staff/teachers/programs, was not only published by the SACB, but was included in a House Internal Security Committee (HISC) combined report on "The Communist Party Youth Program", issued April 1974.

In the HISC report, they also included hearings/reports on other CPUSA youth fronts, including Advance, Burning Issues Youth Organizations, and the successor to the CP's W.E.B. BuBois Clubs of America (DCA), the Young Workers Liberation League (YWLL).[1].

This publication is invaluable for understanding the youth programs of the CPUSA from the late 1950's thru the early 1970's, along with the many names it provides, some of whom were still fucntioning Party members or members of the Party-split-off, the Committee of Correspondence for Socialism and Democracy (COCSD) well into the first decade of the 21st century.

Among those CPUSA members whose names appeared in the HISC/SACB publications as being connected to the CME in New York City, we find:

Spring Term 1970 Teachers: (previous teachers not listed unless for a specific reason)

Center for Marxist Education is based in Cambridge, Massachusetts and is run by the Communist Party USA and Committees of Correspondence for Democracy and Socialism.

According to director Gary Dotterman, the volunteer-run center—which will celebrate its thirtieth anniversary in January — 2005, is still open during limited hours on Thursday evenings, offering lectures, courses, book signings and film series. The center, which has a mailing list of 540 members, also operates the Bookmarx bookstore and hosts a weekly show on Cambridge cable television.

“It’s mainly a place for people to come, converse, learn and explore new ideas and some old ideas,” Dodderman says.

The space on Mass. Ave. was first used as a headquarters for Communist Party USA candidate Laura Ross, who challenged legendary Massachusetts congressman Thomas P. “Tip” O’Neill in the 1970’s. After she lost—twice—the newly founded center took over the space, and to this day pays the rent using donations from members. One of its founders, MIT mathematician Dirk Struik, was banned from teaching during what Dotterman calls “the dark years of the McCarthy era.” Struik stayed on at MIT, and “he couldn’t teach but they had to pay him anyway,” Dotterman says.

Since then, the center’s space has been used by activists and hosted foreign dignitaries, including an ambassador from Haiti and representatives from Cuba. Dotterman says Harvard faculty members and students have taken part in the lecture series and study groups over the years. “We got a really good deal on the rent,” Dotterman says of the space. “We’ve grown up around it.”[2] 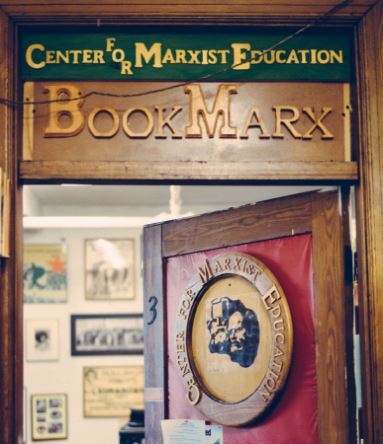 In 2004 Al L. Sargis was the Director of the Center for Marxist Education.[3]

The Center for Marxist Education (CME) is located at 550 Massachusetts Avenue, 2nd floor, in Cambridge near the Central Square MBTA station on the Red Line.

Join members of the Communist Party in Boston to discuss Lenin's writings on the right of nations to self-determination, th role of the working class against all forms of national oppression, and how these relate to imperialism and the fight for socialism. "Lenin: National Liberation, Socialism, and Imperialism" Thursday 28 January 2016".

Join members of the Communist Party of Boston to discuss Lenin's book State and Revolution - The Marxist Theory of the State and the Tasks of the Proletariat in the Revolution.