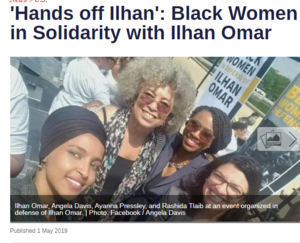 Dozens of women from the Movement for Black Lives, a coalition of African-American advocates, gathered April 30 2019 in support of Congresswoman Ilhan Omar who has been a target of hate-speech and trolling by right-wing politicians and their supporters.

The women gathered in front of Washington’s Capitol building chanting, “We love you” to Omar in the event named “Black Women in Defense of Ilhan Omar.”

"The thing that upsets the occupant of the White House, his goons in the Republican Party (and) many of our colleagues in the Democratic Party," Omar told the crowd, "is that they can't stand that a refugee, a black woman, an immigrant, a Muslim, shows up in Congress thinking she's equal to them."

Miski Noor told Middle East Eye that Omar is facing such criticisms because of her identity. She is a Muslim woman and was a Somalian refugee when she arrived in the U.S.

"There are people, because of their white supremacist and racist views of the world, (who) hate her because of her identities and based on fear," she said.

"At the same time, we know Ilhan is being attacked because of the content of what she's saying,"added Noor.

Ayanna Pressley, Omar’s fellow U.S. Congresswoman, shouted, "Hands off Ilhan,” while criticizing politicians from her own Democratic Party, for failing to stand with the legislator.

She added, "silencing of Black women" won’t be acceptable anymore.

"This is a reckoning. This is us assuming our rightful place, as the table-shakers, as the truth-tellers, as the justice-seekers, as the preservers of democracy," said Pressley.

Omar in her speech said that Islamophobia and anti-Jewish hatred are "two sides of the same coin of bigotry.”

"The occupant of the White House and [his] allies are doing everything that they can to distance themselves … from the monster that they've created that is terrorizing the Jewish community and the Muslim community," the Congresswoman said.

"We collectively must make sure that we are dismantling all systems of oppression," added Omar.[1]

Democracy Now! speaks to the academic and activist Angela Davis, as well as Barbara Ransby, historian, author, activist adviser to the Movement for Black Lives and one of the planners behind Black Women in Defense of Ilhan Omar.[2]
Retrieved from "https://keywiki.org/index.php?title=Black_Women_in_Defense_of_Ilhan_Omar&oldid=490242"