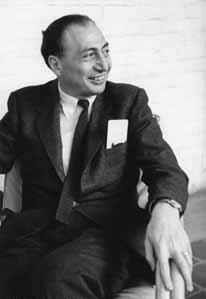 Dr. Bernard T. Feld (December 21, 1919 - February 19, 1993) was an emeritus professor of physics at the Massachusetts Institute of Technology who helped usher in the atomic era as an assistant to Enrico Fermi. Subsequent to his research work he became a leading voice for nuclear disarmament for nearly half a century.[1]

In 1945 Feld spent six months in Washington, D.C. where he and other leading physicists were lobbying against military control of nuclear research and weapons development. The result was legislation setting up the civilian Atomic Energy Agency. This period signaled the beginning of Feld's lifelong commitment to peaceful uses of atomic power and to ending the threat of nuclear war.[1]

Bernard T. Feld, president, Council for a Livable World: Heavy far left funding. They will program an ‘all court press’ against us in ‘72.”

According to colleagues, Feld was especially proud to be on Richard Nixon's "enemies list".[1]

As at 1982, Bernard Feld served as a Director on the board of the Council for a Livable World. The Council was founded in 1962 by nuclear physicist Leo Szilard and other scientists. Its purpose is to campaign against the proliferation of nuclear weapons through lobbying and by supporting candidates who share their vision.[3] Feld also served as president for the Council for a Livable World.[1]

American Committee on East-West Accord

As at March 10, 1982, Bernard Feld, chairman of the executive committee of the Pugwash Conferences, Professor of Physics, MIT, and editor of The Bulletin of the Atomic Scientists was a member of the American Committee on East-West Accord. The ACEWA, based in Washington, D.C., was a tax-exempt "independent educational organization", with the stated aim of "improving East/West relations, with special focus on U.S.-Soviet relations." Bernard Feld also endorsed the Kennedy-Hatfield Nuclear Freeze Resolution which was introduced in the Senate on March 10, 1982.[4]

Bulletin of the Atomic Scientists

As at April 1984, Bernard Feld served as Editor-in-Chief on the staff of The Bulletin of the Atomic Scientists journal. Feld also served on the Board of Directors for the journal.[5]

In 1988 Bernard Feld was listed as serving on the Council of the Pugwash Conferences on Science and World Affairs.[6]

Feld served as president of the Albert Einstein Peace Foundation.[1]