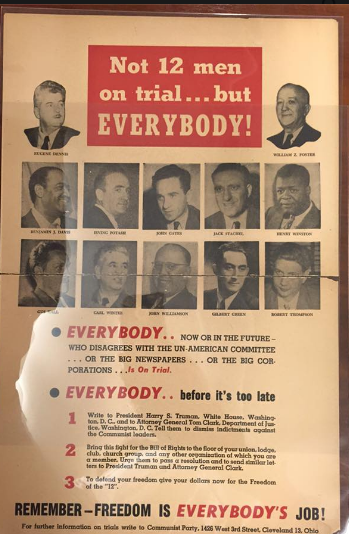 When the Communist Party USA, entered its period of crisis following the Khrushchev report to the 20th Congress of the Communist Party of the Soviet Union (CPSU) on the crimes of Stalin, there arose within the Party in the U.S. at least four different factions. The first of these was the right wing, led by Daily Worker editor John Gates, Fred Fine, and others. The second was the center grouping, led by Eugene Dennis, the Party’s general secretary. The third was the “left,” led by William Z. Foster, Bob Thompson, and Ben Davis. The fourth was the so-called “ultra-Left,” which called itself the Marxist-Leninist Caucus. It was this grouping, out of which grew the Provisional Organizing Committee to Reconstitute the Marxist-Leninist Communist Party, with which Noel Ignatin was associated.[2]

One group of secret Communists in the United States was led by Arthur Kinoy, a radical lawyer who ended his long career as a distinguished professor at Rutgers Law School, and included Dr. Jeremiah Stamler, a pioneering cardiologist at Northwestern Medical School, whose lawsuit marked one of the first successful challenges to the House Un-American Activities Committee (HUAC). And Stanley Levison, a key aide and supporter of Martin Luther King, Jr..

Eugene Dennis told Morris Childs in 1958 that the Levison “group,” active in the NAACP and the American Jewish Congress, still provided money from party businesses it controlled to a New York functionary and activist, the African-American Communist leader Benjamin J. Davis.[3]