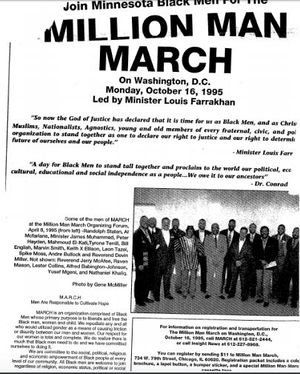 In the wake of the Minneapolis riots in May 2020, Keith Ellison held a press conference on May 30 with other "community leaders" where he supported the people who were ostensibly protesting the death of George Floyd, and claimed outside elements were responsible for infiltrating the protests.[1]

"People that are trying to tarnish the reputations of the noble protest for justice are out there trying to mix in with the crowd so that people don't just say 'oh look all those protests are bad, their cause can't be just, they're just out there causing trouble.' ...We know that the noble, just aims of the protestors are righteous and good. But we also know that some evil elements are literally defusing themselves with the protest to destroy and cause arson so the whole community has a low opinion of the protest. Because they are not for justice for Mr. Floyd - They're against it!"

Some were visibly shaken as the gravity of this week’s events became clear.

“They’re not part of our state, and they’re coming from the outside,” Klobuchar said.

The community leaders denounced systemic racism that they say have long contributed to inequality and tensions, and said outside anarchists were intent on causing destruction.

“We cannot watch our brothers being murdered and, then, on top of that, watch our communities being demolished and then trying to blame us,” said Osman.

Emilia Gonzalez Avalos, executive director of Unidos MN, a nonprofit, spoke about how minority business owners on Lake Street, the heart of the Minneapolis Latino community, sought to defend their livelihoods.

The Million Man March was led by Louis Farrakhan.