Difference between revisions of "Albert Lee" 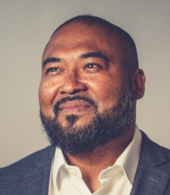 An Oregonian by choice, Albert Lee is on his second return to the state and is currently the Dean for Business and Computing at the Sylvania Campus of Portland Community College. Prior to working for the college across two decades, Albert has run his own business, worked in public, private, and non-profit sectors at organizations, including: One Plum Design, the American Bar Association, General Electric, and the US Army. Born in South Korea, he is both a first-generation immigrant via his mother and a seventh or eighth generation American via his father.

A first-generation college and law school graduate with a multi-ethnic background, who has experienced homelessness, domestic violence, and a working-class upbringing, he broadly shares the perspectives and struggles that many in our community have faced, while also experiencing the joys and positive interactions with many great individuals and organizations throughout life. The totality of his life experience has led him to be civic-minded and community engaged.

Albert Lee is a volunteer and active member of several organizations and committees, devoting 10 to 20 hours of volunteer time weekly with organizations including: the c3 Board of APANO, TriMet’s Transit Equity Advisory Committee, the City of Portland’s Citizen Review Committee, the Executive Board of the Giving Tree NW, Health Care for All Oregon, the NAACP, Korean American Coalition of Oregon, the Democratic Party of Oregon, Portland Democratic Socialists of America, and others.[1]

Albert Lee will challenge U.S. Rep. Earl Blumenauer (D-Oregon) in the 2020 Democratic primary for Oregon's 3rd Congressional District, which stretches from Mount Hood to the West Hills of Portland.

Lee, 44, is the dean of Portland Community College's Business and Computing division and the secretary of the Asian Pacific American Network of Oregon's board of directors. He's also affiliated with the city's Independent Police Review, JoAnn Hardesty's campaign and Health Care for All Oregon, among others.

Lee is running to "change the system" through "drastic action," according to his campaign website. His climate-centered policy seeks to rebuild the U.S. and its infrastructure by combating climate change with Alexandria Ocasio-Cortez's Green New Deal and moving military resources and funding toward what he calls a "green industrial complex."

"I looked at what's been done by our leadership," Lee said, "and I don't really think that much has been addressed."

He also questions capitalism's place during a time of global climate catastrophe, calling to end wealth inequality and resource waste by instituting living wages and strengthening unions. His ideas parallel his dues-paying membership in the Portland Democratic Socialists of America.

Lee's father is African American and his mother is Korean. If elected, he would be Oregon's first biracial congressional representative.[2]