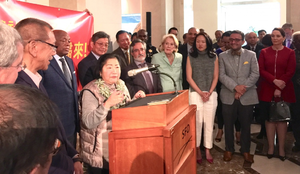 Charlotte Shultz organized the largest welcome ceremony in the history of SF Airport for Rose Pak in 2016 after she received a kidney transplant surgery in China."[1]

"From the greeting by San Francisco Mayor Ed Lee and two former mayors to the Rolls-Royce ride — complete with police escort — it would be hard to imagine anyone from President Obama on down topping the welcome for Chinatown majordomo Rose Pak on her return to the city.

"Also there was Academy of Art University President Elisa Stephens — whom Herrera just sued, claiming the school has illegally converted 22 buildings in the city into student housing and other uses.

"Even acting Police Chief Toney Chaplin made the pilgrimage.

"Pak wasted little time tossing out barbs as she emerged from customs, with Herrera being the first target.

"“Are you going to serve me papers?” Pak mockingly asked, referring to the scrutiny she and her Chinatown allies have received in the past mostly from the district attorney’s office over their campaign tactics. “Or are you here to serve the mayor papers?”

"Pak also publicly chided Herrera for suing her pal Stephens. After such pleasantries, she joined Brown and Public Works chief Mohammed Nuru in a burgundy Rolls-Royce from the Academy of Art’s classic-car collection and headed to a Chinatown luncheon — escorted by SFPD motorcycle officers.

"“It was a Fellini movie — if it had been filmed for reality TV, nobody would have believed it,” said San Francisco PR agent Lee Houskeeper, who was among the spectators.

"“Every year, tens of millions come and go from San Francisco International, but this is the first time I’ve seen a civic event of these proportions at the airport,” Peskin said. “It was actually quite entertaining.”

"The entertainment continued at the Far East Cafe, where Pak was flanked at a luncheon banquet by Brown, Chaplin and police Deputy Chief Garret Tom, a longtime Pak protege who has been mentioned as a candidate for the chief’s job.

"Also at the head table were Campos, Kim and Peskin — who defeated Lee’s hand-picked candidate for his supervisor’s seat last year, with Pak’s help.

"As for the mayor, he missed the banquet — instead catching a flight to D.C. for a gun-safety conference at the White House. In doing so, he missed Pak’s expletive-laden remarks at the luncheon, laying in to Brown for persuading her to push Lee to run for mayor back in 2011.

"Pak got a new kidney as part of her treatment in China, and said her doctor told her she could expect to live another 40 years. She said she needed only 15 years, including 10 to get the Ping Yuen public housing complex in Chinatown rebuilt.

"And the other five years?

"“To get even with the people who wished me dead.” 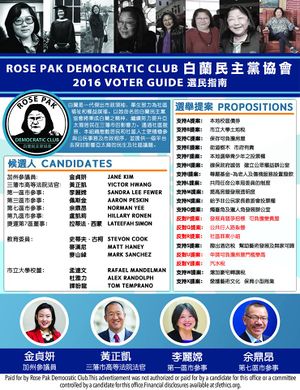 [[On Saturday, October 7, 2017, the Chinese Progressive Association (San Francisco) will celebrate our 45th anniversary with the theme, “Harnessing the Strength of a Thousand Rivers.