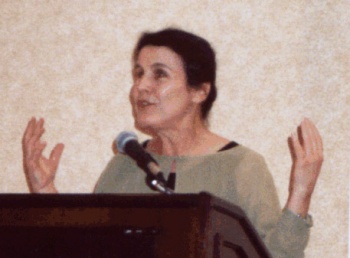 Roberta Lynch came to Council 31 AFSCME after serving as Research Director of the Chicago Area Committee on Occupational Safety and Health. Her first post with the Council was as Public Policy Director, a position she assumed in 1984. She became deputy director in 1993.

Lynch’s career has been dedicated to the rights of working people, to equal opportunity, to economic justice. A Philadelphia native, she is a graduate of Duquesne University and was previously involved in a number of community and political organizing efforts.

She is also the co-author, with David Bensman of Rusted Dreams: Hard Times in a Steel Community, which chronicles the decline of the steel industry in Southeast Chicago.[1]

In 1974 Roberta Lynch was a member of the Pittsburgh New American Movement.[2]

According to the New American Movement Speaker's Bureau, Roberta Lynch "is a long-time and experienced activist and a founding leader of New American Movement. With extensive experience with both the feminist and socialist movements, she knowledgeably traces the relationship between feminism and socialism in the past, and outlines prospects for the contemporary movements. As a member of NAM's national leadership, she is familiar with the structure and realities of the development of revolutionary organization".[4]

In 1980, Lynch was a delegate to the December 12-14 Chicago, National Council meeting of the New American Movement[7].

In the 1980s Roberta Lynch was a speaker on the Women's Liberation section of the NAM Speakers Bureau on the subject of Socialist Feminism, Past and Present.[8] --Kiwi 10:51, 4 May 2010 (UTC)

In 1981 Craig Merrilees, Chicago Northside NAM and Roberta Lynch and Frank Ackerman of the NAM Negotiating Committee led a workshop entitled NAM/DSOC Informational Session and Preliminary Debate at the 10th Convention of the New American Movement. The convention was held in a union headquarters in Chicago and ran from July 29 - August 2, 1981.

On Sunday, June 7, 1981, the Los Angeles Chapter of the New American Movement sponsored a Tribute to Ben Dobbs for "His lifelong commitment to socialism". The event was held at the Miramar-Sheraton Hotel, Santa Monica, California. Sponsors of the event included Roberta Lynch.[10]

After intensive debate, the 1980 New American Movement Convention passed a resolution (by a 2-1. margin) calling for negotiations with Democratic Socialists Organizing Committee, the election of a Negotiating Committee, and the development of a Negotiating Document. Frank Ackerman, Joanne Barkan, David Dollar, Richard Healey, Anne Hill, Katherine Kennedy, Roberta Lynch, and Liz Weston were elected to the Negotiating Committee. Holly Graff was added as the ex officio Political Committee member, and John Beverly became the first alternate. In the fall of 1980 this Committee developed a Negotiating Document which was reviewed by chapters and then amended and approved (by a ninety per cent margin) at the December National Council meeting.[11]

Roberta Lynch, a columnist with In These Times, addressed a "special unity convention session" on day two of the Democratic Socialist Organizing Committee/New American Movement Unity Convention in Detroit March 21/22 1982, that resulted in the formation of Democratic Socialists of America[12].

In 1983 Roberta Lynch was a Chicago delegate to the Democratic Socialists of America conference in New York City, October 14-16, 1983[13]

In 1985[14] and 1986,[15] Roberta Lynch of Illinois was listed as a member of the Feminist Commission of the Democratic Socialists of America.

Dorothy Sue Cobble, was the editor of "Women and Unions: Forging a Partnership". (Ithaca, NY; ILR Press, 1993). Contributors included Margaret Halleck, of the University of Oregon and formerly of the Service Employees International Union, Jean Ross and Ronnie Steinberg, both of whom have been active in Democratic Socialists of America, Gloria Johnson - a vice president of the International Union of Electronic Workers, new president of the Coalition of Labor Union Women, a newly elected member of the AFL-CIO executive council, Susan Cowell, an International Ladies Garment Workers Union vice president and DSA activist, Virginia duRivage and David C. Jacobs, Leslie Nulty of the UFCW, DSA activist Roberta Lynch.[17]

Back to Basics conference

In 1998 James Weinstein presided over a major Chicago "Back to Basics" conference designed to re-align the U.S. left back to "class politics"[18]

"To explore how we (the Left) can increase our presence in the mainstream of American political and intellectual life" was the way James Weinstein, editor of In These Times magazine, stated the purpose of the "Back to Basics Conference". The conference was held Oct. 9-11, at Chicago's Congress Hotel. Several hundred people attended the conference, which In These Times magazine sponsored and managed. In practice the conference urged the Left to abandon its dead-end, self-destructive course toward cultural politics and return to class politics.

Lynch is an International Vice President for the American Federation of State, County and Municipal Employees from Chicago, Illinois.[19]

"He (Obama)always wants to understand an issue and think it through," said Roberta Lynch, deputy director for Council 31 of the American Federation of State, County and Municipal Employees. "You have to make your case no matter who you are."[20]

On January 4, 2008 several AFSCME leaders wrote to union president Gerald McEntee protesting that union resources had been used to oppose the candidacy of Barack Obama.[21]

We are writing to protest in the strongest terms the negative campaign that AFSCME is conducting against Barack Obama. We do not believe that such a wholesale assault on one of the great friends of our union was ever contemplated when the International Executive Board (IEB) made its decision to endorse Hillary Clinton...

We are calling on you to take whatever action that is within your legal purview to immediately end AFSCME's attack campaign against Sen. Obama. In the event that you are not able to legally compel these staff members to cease these actions, we are calling on you to immediately take action to discontinue such independent expenditures in order to ensure that no further attacks occur. And we also urge you to ensure that no funds are utilized to wage such "attack campaigns" among our own members. 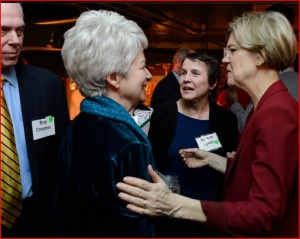 Long time Democratic Socialists of America member Julian Bond was given a “Lifetime Achievement Award”, while another one time DSAer Mike Lux, was given a Progressive Leadership Award, as was Damon Silvers.[22]