The concept of the New American Movement originated soon after the disintegration of Students for a Democratic Society in Chicago in 1969, when ·John Rossen, a one-time district organizer for the Communist Party USA and then the landlord of the SDS offices, distributed a number of pamphlets calling for a new revolutionary force based on a combination of Marxism and American nationalism, and organized the Johnny Appleseed Movement for Peace and Human Rights.

Rossen's ideas gave birth to two groups. Chicagoan Jeremy Rifkin took over Rossen's pamphlets and and graphics to form the People's Bi-centennial Commission, in which Rossen remained active until at least 1975, while another group developed other aspects.

For more detailed information on the communist/marxist affiliations of both Rossen and Rifkin, see:

In January 1971, Rossen's ideas were adapted by three former SDS activists - Theirrie Evelyn Cook, one of the negotiators of the People's Peace Treaty with the Vietcong; Michael P. Lerner and Charles "Chip" Marshall, then enjoying a brief notoriety as leader of the Seattle Liberation Front, then trial for inciting a riot in response to the contempt citations in the Chicago 8 Conspiracy Trial. The three Seattle organizers circulated papers call1ng for the creation of a new revolutionary party which they then termed. the New American Community Party.

In the late winter of 1970 and into the the spring of 1971, this group worked closely with Rennie Davis in developing plans for the Washington, D.C. Mayday disruptions in support of the Vietnamese communists, with Lerner and Marshall becoming active leaders National Mayday Collective. The Mayday organization provided the New American Community Party with the opportunity to reach a large segment of the radical community and to receive input from New Left theoreticians such as Douglas Dowd and Staughton Lynd.

New members were gained and the name New American Movement began to be used.[1]

Among the earliest founders of the New American Movement were James Weinstein of Chicago and West Coast radicals including Michael Lerner, formerly of the Seattle Liberation Front, Theirrie Cook, a supporter of the Peoples Coalition for Peace and Justice and Dan Siegel, former student body president at the University of California, Berkeley.[2]

In the early days of NAM, contacts for the organization included Lynne Shatzkin and Jerry Coffin, NY, Michael Lerner, then working from the Cambridge Policy Studies Institute, a branch of the Institute for Policy Studies, Andy Starr, Philadelphia, Alice Lynd and Staughton Lynd, Chicago, Frank Blumer, Seattle, and Jim Williams, by 1975 a co-editor of the Communist Party USA trade union publication, Labor Today.[4]

The first national meeting of the New American Movement was held in Chicago October 9-11. Up to 75 delegates and observers from 25 cities participated. The meeting laid the basis for a Thanksgiving conference on program in Chicago. The political principles, program, and structure of the organization were discussed;

Debate centered on what sort of organization N AM was to be, including its relation to the women's and non-white movements. It was the consensus of the group that N AM would attempt to become a mass organization as opposed to a cadre or sect group. In addition, it was agreed that NAM should focus on organizing working people, broadly defined.

We will encourage work in a variety of ways, including community, institutional, and factory work, and will not at this time favor one area. over another. It was also generally agreed that programs, rather than highly developed political lines, would be the distinguishing characteristic of NAM.

It was felt that certain minimum principles were necessary which would include a large number of people while, at the same time distinguishing NAM from liberal reform groups. The body passed a six point motion which attempted to set down these guidelines. In summary, the motion stated that:[5]

At the conference, a body was mandated to write a shorter version of the original NAM document in a style, adapted to mass distribution. People elected to this committee were:[6]

The committee was mandated to have the basic document written by October 23.1971

In 1971, the NAM National Interim Committee was composed of:

Favored working with the Socialists

In 1980, a group of Western NAM supporters issued a statement to the National Conference urging closer ties to the Socialist Party USA.[11]

We the undersigned Colorado-Wyoming NAM members. and friends, favor closer work between and the Socialist Party USA.

In 1980 Liz Weston, Buffalo, was a delegate to the December 12-14 Chicago, National Council meeting of the New American Movement[12].

1975: August 7-10: Fourth National Convention of the New American Movement in Oberlin, Ohio; a Marxist-Leninist Organizing Caucus emerges within the organization. (Guardian, August 27 and October 1, 1975 in BTr-4)[13]

In 1981 Liz Weston and Christine Riddiough, Co-Chairs of the Commission led a workshop entitled Socialist-Feminist Commission at the 10th Convention of the New American Movement. The convention was held in a union headquarters in Chicago and ran from July 29 - August 2, 1981. 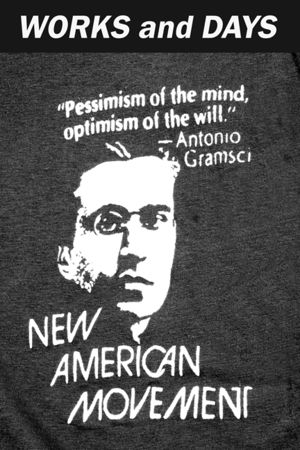 NAM's entry/merger with DSOC was a key mechanism[15]by which Gramscian thought became the mainstream of U.S. Marxism in the 1970s-80s. In essence NAM was the political continuation of the "praxis" wing of the Students for a Democratic Society as opposed to the Weather Underground.

NAM's interest in education also grew out of its members' engagement with the work of Antonio Gramsci. By the mid-1970s, several key figures had taken to heart his analysis of civil society and bourgeois hegemony. In turn, they not only led seminars for NAM members on his revolutionary strategy, but also incorporated his thinking into the organization's program for how to produce a social transformation in what they considered to be a non-revolutionary moment. This interest in Gramsci reflects NAM's approach to Marxism. The reader for its political education course, Basic Marxism: What It Is & How to Use It, clearly demonstrates the movement's critical engagement with this tradition of revolutionary thought.

Thanks to an associate membership" program for persons not wishing to be organizationally active within NAM, but who support its program, NAM can claim 875 members in thirty chapters. The most active NAM chapters are in Chicago, Dayton, Pittsburgh, Los Angeles, Detroit and the San Francisco Bay area.

The central debate were on what role, if any, NAM should play in electoral politics, particularly in the 1980 presidential campaign and on merger proposals from the Democratic Socialist Organizing Commttee (DSOC) headed by Michael Harrington.

Complaints against merger with the 4,000-strong DSOC were many and were led at the convention by the August 7 caucus mainly of ex-members of Trotskyist groups. They charged that DSOC was "social democratic," not "revolutionary socialist" like most of NAM.

DSOC was criticised for not taking the side of the Palestine Liberation Organization (PLO), for being "reformist" and insufficiently feminist. NAM chairman Richard Healey and his mother, Dorothy Healey, reminded NAM that merger possibilities have been discussed in the past with the Mass Party of the People, the Socialist Party USA, the International Socialists (IS), and even briefly with the Socialist Workers Party.

The result was that NAM agreed to "non-merger talks" with DSOC and the possibility of strengthening DSOC's "left caucus." NAM was strongly opposed to becoming involved in DSOC's backing the Kennedy presidential campaign or draft movement.

After intensive debate, the 1980 New American Movement Convention passed a resolution (by a 2-1. margin) calling for negotiations with Democratic Socialists Organizing Committee, the election of a Negotiating Committee, and the development of a Negotiating Document. Frank Ackerman, Joanne Barkan, David Dollar, Richard Healey, Anne Hill, Katherine Kennedy, Roberta Lynch, and Liz Weston were elected to the Negotiating Committee. Holly Graff was added as the ex officio Political Committee member, and John Beverly became the first alternate. In the fall of 1980 this Committee developed a Negotiating Document which was reviewed by chapters and then amended and approved (by a ninety per cent margin) at the December National Council meeting.[17]

The Socialist Feminist Commission was a part of the New American Movement in the early 1980s.[19] Its Gay and Lesbian Task Force's newsletter was the Working Papers.[20] 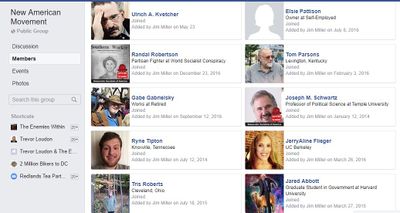