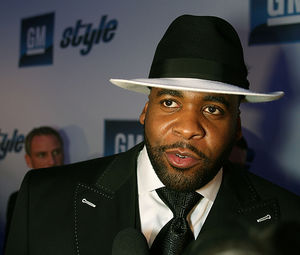 Template:TOCnestleft Kwame Kilpatrick is a former mayor of Detroit and is the son of Carolyn Kilpatrick.

In each election cycle, we endorse a diverse array of candidates who exemplify our values and show unusual promise to advance our progressive goals. We invest in some of the most competitive races as well as in some of the most challenging – those in which the candidates are outstanding but the traditional Democratic supporters are most reticent. We back candidates in primaries as well as general election races, and we focus the bulk of our resources on electing challengers and protecting vulnerable incumbents.[1]

Kilpatrick was endorsed by 21st Century Democrats in 2001 Mayoral race.[2]

On June 14, 2006, Ambassador Bernado Alvarez Herrera, Venezuela's envoy to the United States met with the Legislative Black Caucus in Lansing with several Detroit city officials, including council members JoAnn Watson, Brenda Jones, Kwame Kenyatta, Martha Reeves and Mayor Kwame Kilpatrick to discuss how to expand his country’s programs that help the poor. He said that his country, under President Hugo Chavez wants to provide heating assistance and free eye surgery to needy Detroiters. Herrera's visit was facilitated by MI State Rep. Lamar Lemmons III. His consulate, General Martin E. Sanchez of Chicago traveled with him. Shortly prior to Herrera's visit, several African American civil rights leaders, including Harry Belafonte and Dr. Cornel West had visited Caracas. Herrera stated that such visits were integral: "They provide a catalyst to the assistance his country is now offering to low-income families and help foster the relationship it wants to build with Blacks in America."[3] That evening, the visitors and city officials attended community reception featuring a "grassroots potluck" dinner, hosted by Michigan Welfare Right Organization which was attended by approximately 150 people. The event was supported by the U.S./Cuba Labor Exchange, Justice for Cuba Coalition, Latinos Unidos, International Action Center and Call ’Em Out. At the reception, Alvarez announced a new program to extend the free eye surgery program begun by Cuba to the U.S. Midwest.[4][5]

At the reception Kwame Kilpatrick said he saw “Caracas as an sister city to the city of Detroit, and his mother U.S. Rep. Carolyn C. Kilpatrick had visit Venezuela.[6]