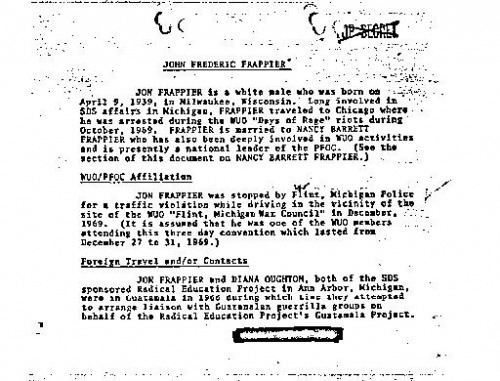 December 27-31, 1969, about 400 of the national membership of the Weatherman faction of SDS held a “War Council” at a ballroom dancehall in Flint, Michigan.

Jon Frappier's FBI profile claims that he was arrested during the Weathermen's "Days of Rage" rioting in October 1969 in Chicago and that he was also issued with a traffic ticket near the 1969 Michigan "War Council."

The FBI also allege that Frappier traveled to Guatemala in 1966 with future Weather Underground Organization member (and Bill Ayers' late girlfriend) Diana Oughton. The pair were accused of trying to contact Guatemalan guerilla's for the Students for a Democratic Society Radical Education Project.

Jon Frappier went on to run the San Francisco office of the North American Congress on Latin America (NACLA)-a creation of the Weather Underground's parent organization Students for a Democratic Society.

NACLA was formed in 1967 after the Tricontinental Congress in Havana by individuals associated with Students for a Democratic Society(SDS). NACLA said it was recruiting "men and women, from a variety of organizations and movements, who not only favor revolutionary change in Latin America, but also take a revolutionary position toward their own society." SDS leaders called NACLA the "intelligence gathering arm" of the radical movement. NACLA's published Methodology Guide recommends supplementing public source information by pretext interviews and phone calls, and NACLA has also planted or developed covert sources in government agencies and private companies...

After NACLA, Jon Frappier, with Fred Goff, Loretta Strharsky and Harry Strharsky plus "40 dedicated volunteers", went on to establish an organisation that has become the intelligence hub of the U.S. left, the Oakland based DataCenter, a-"national progressive non-profit that provides strategic information & research training to communities advocating for dignity, justice & civil rights[3]."

In 2007 Jon Frappier was listed on the DataCenter's annual report as a donor to the organization. The Oakland, California based DataCenter is widely regarded as the intellegence wing of the United States Left and has close ties to Cuba.[4]

Susanne Jonas the author of "The Battle for Guatemala: Rebels, Death Squads, and U.S. Power" (Westview Press, 1991) thanks Elizabeth Martinez...Jon Frappier, "who first introduced me to Guatemala in 1967..." Roxanne Dunbar-Ortiz, Richard Adams, Jorge Castafieda and Barbara Epstein ".... for their help with the book".

In 2005, Van Jones and Diana Frappier launched the Ella Baker Center's Green-Collar Jobs Campaign. This led to the establishment of the US's first "Green Jobs Corps" in Oakland.

Diana Frappier served on the founding board of Green For All. Jon Frappier and Nancy Frappier are listed as donors to the organization[5].

Michael D. Nolan recounts on the radical Rag Blog that during a recent to Cuba he was guided around the the Island by Coqui (Pedro Enrique) Salazar.

"Now 65, Coqui had a full mane of wavy black hair. As a young man, he fought with Castro in the mountains outside his native Guantanamo...a member of the student movement in Havana working to overthrow the Batista regime."

It turned out that "Coqui" had a brother living in the US. Michael D. Nolan offered to help track down the long lost Pedro Salazar.

I sent a message to Jon Frappier, a detective friend in California, asking if he would search for a Pedro Salazar, or Pedro Eusebio Salazar, or Peter E. Salazar, living in northern California and born in the late 1950s...

Several days after our return to San Francisco, Jon came to my house. I cleared the paper clutter on the yellow Formica kitchen table so he could spread out lists generated by his online investigation. Among them was a Pedro E. Salazar, born in 1957, living on 21st Street in San Francisco with a phone number. We both agreed it was good bet.

The brothers were united.

In 2009 Jon Frappier and Sara Theiss were financial supporters of the Ella Baker Center for Human Rights in Oakland, California.[6]