He is the brother of Philip Burton, the husband of Michele Burton, and father of Kimiko Burton-Cruz. He is a mentor to Barbara Boxer.

According to radical former San Francisco district attorney Terence Hallinan, an endorsement from Carlton Goodlett was important to the election of many political leaders. Goodlett helped to inspire and promote the political careers of Mayor Willie Brown, the late Representative Philip Burton, Senator John Burton, and Representative Ron Dellums[2]. 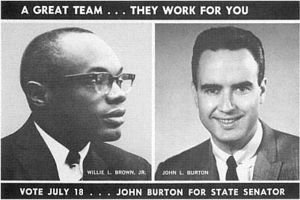 Over 250 students from 71 Northern California colleges gathered at a National Youth Caucus (NYC) conference Saturday in an effort to insure maximum representation of 18-24 year-olds at the 1972 Democratic National Convention. The conference was held at San Jose State College. A California Black Caucus also met Saturday at Garden Oaks School in East Palo Alto, drawing about 300 blacks from Northern California. Assemblyman Willie Brown (Dem—San Francisco) told the delegates that a solid concentration of black political power could give them considerable influence at the Democratic National Convention in Miami in July. He encouraged them to vote for a black candidate on the first ballot at the convention, no matter who they might actually be supporting. Rep. Shirley Chisholm (Dem—New York) is the only black candidate so far. Both meetings discussed youth representation at the February 12 district caucuses which each presidential candidate will hold to recommend a slate of pledged delegates and a representative to the candidate's state organizing committee.

Leading the Stanford delegation to the youth conference were ASSU Co-President Larry Diamond, Paula Johnson, Joel Kenwood, Connie Peterson and Zach Zwerdling. They are the five members of the central committee of Northern California's NYC Conference. Diamond also serves as State Chairman of the California NYC. Sen. Alan Cranston (Dem—Calif.) told the opening session of the conference that the NYC "can do a lot to shape the choices this nation and this state make next year." He added that he shared young people's "frustration over the way things are going", but that he also believed that "change can be achieved with a little more effort and organization."

Like Cranston, State Assemblyman Ken Meade (Dem—Berkeley) spoke of the power of young people in the elctoral process. Meade noted that in 1968 President Nixon carried California by 500,000 votes and that there will be at least 1.5 million 18-24 year olds casting their first votes in 1972. Taking these figures into account, Meade said that "without carrying California, Nixon would not have been elected President in 1968 and the youth vote assures that he will not win in 1972." He advised "Don't just work within the system, take advantage of it." San Francisco Sheriff Richard Hongisto claimed that "policemen are moving us towards a police state from the bottom all the way up to Attorney General John Mitchell." Hongisto, who has been a law enforcement officer for several years, was the upset winner in his race to be elected Sheriff last year. He urged his audience to "work to destroy those racist, sexist stereotypes of our decadent society." National Chairman of Americans for Democratic Action (ADA) Allard Lowenstein, a former New York Congressman and organizer of the 1968 "Dump Johnson" movement, said that "four more years of an administration steeped in deception" would be severely damaging to "the whole fabric of freedom in this country."

The delegates had "further opportunity to talk informally with various legislators and peace activists at receptions and dinners given in their honour". One such occasion was a reception given by Congressman John Burton and members of of Congress for Peace Through Law.[4]

On August 1 1979 Thirty-five U.S. Congressmen signed a letter[7]to President Jimmy Carter demanding that private bank loans to Chile be barred unless the Chilean government chose to extradite three military officials, including the former director of the Chilean intelligence service. The three had been indicted for complicity in the assassination of marxist Unidad Popular government member and KGB agent Orlando Letelier and the killing of Institute for Policy Studies (IPS) staffer Ronni Moffitt in 1976.

John Burton, was the recipient of the Phillip Burton Award, at the 2004 Phillip Burton Immigration & Civil Rights Awards, from the Immigrant Legal Resource Center, in the Bay Area.[10]

• A program highlighting multiple new UFW organizing campaigns among strawberry, vegetable, tomato and melon workers in the Central Coast and Central Valley in the wake of Governor Jerry Brown signing a UFW-sponsored law in 2011. SB 126 says if growers cheat by breaking the law and denying farm workers their union, then the state can immediately certify the union and get the workers a contract. It also speeds up the process so farm workers don’t have to wait two years before starting negotiations and it lets the ALRB general counsel go to court to reinstate farm workers illegally fired during union election drives.

In early 2013, mainly Democratic Socialists of America aligned activists, together with many elected officials across the United States came together to urge President Barack Obama to award posthumously the Presidential Medal of Freedom to the legendary organizer, Fred Ross, Sr.. The Saul Alinsky trained radical was the first to organize people through house meetings, a mentor to both Cesar Chavez and DSAer Dolores Huerta, and a pioneer in Latino voter outreach since 1949 when he helped elect Communist Party USA affiliate Ed Roybal as Los Angeles’s first Latino council member, "Ross’ influence on social change movements remains strong two decades after his death in 1992".