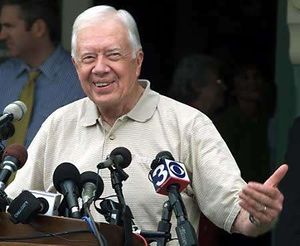 Template:TOCnestleft Jimmy Carter is a former President of the United States.

On August 1 1979 Thirty-five U.S. Congressmen signed a letter[1]to President Jimmy Carter demanding that private bank loans to Chile be barred unless the Chilean government chose to extradite three military officials, including the former director of the Chilean intelligence service. The three had been indicted for complicity in the assassination of marxist Unidad Popular government member and KGB agent Orlando Letelier and the killing of Institute for Policy Studies (IPS) staffer Ronni Moffitt in 1976.

With Thomas Moore and Alex Garrett. 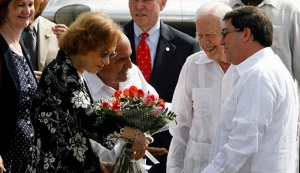 Former U.S. President Carter, whose Center has monitored elections in Venezuela, expressed his condolences in a statement recognizing Chávez’s success in cutting the poverty rate in Venezuela by half.[3]

A march and rally marking the 50th anniversary of Rev. Martin Luther King, Jr.'s March on Washington on Capitol Hill, beginning a day of events recalling the historic 1963 civil-rights demonstration.

The march along a 1.6-mile route downtown will pass several buildings with significance for the civil-rights era, including the Justice Department, U.S. Courthouse, Department of Labor and Washington Monument. The procession, to be led by a restored 1960s-era bus like that used by civil-rights activists the Freedom Riders, is expected to draw upward of 100,000 participants. The original march, which demanded jobs and equal rights for blacks, drew about 250,000.

The route ends about midday at the Lincoln Memorial, where President Barack Obama will speak while standing in the same spot on the memorial steps where Rev. King gave his "I Have a Dream" speech, a stirring vision of equality, exactly five decades ago. Mr. Obama will cap two hours of official speeches between 1 and 3 p.m.

Wednesday's speakers include former presidents Bill Clinton and Jimmy Carter, as well as civil-rights protest hero Rep. John Lewis of Georgia, the only surviving speaker from the original 1963 event. D.C.

Resolution calling for a final settlement of the Korean War

Washington, DC – As President Trump arrives to Hanoi, Vietnam, Rep. Ro Khanna, along with eighteen Democratic Members of Congress, have introduced a resolution calling for a final settlement of the Korean War, now officially in its 68th year.

The resolution -- which is backed by former President and Nobel Peace Laureate Jimmy Carter and a range of Korean-American and pro-diplomacy organizations -- urges the Trump Administration to provide a clear roadmap to achieve a final peace settlement while highlighting the importance of reciprocal actions and confidence-building measures between the parties.

“Historic engagement between South and North Korea has created a once-in-a-generation opportunity to formally end this war,” said Rep. Ro Khanna, a member of the House Armed Services Committee. “President Trump must not squander this rare chance for peace. He should work hand in hand with our ally, South Korean President Moon Jae-in, to bring the war to a close and advance toward the denuclearization of the peninsula.”

“I commend this important resolution that will help bring this nearly 70 year conflict to a close,” said President Jimmy Carter. “I have visited North Korea several times to talk with their leadership and study the best path forward for peace. Ending the threat of war is the only way to ensure true security for both the Korean and American people and will create the conditions to alleviate the suffering of the ordinary North Koreans who are most harmed by ongoing tensions.”

Co-led by prominent progressive Reps. Andy Kim, Barbara Lee, Pramila Jayapal, Deb Haaland, and Jan Schakowsky, the resolution calls on the Trump Administration to make greater efforts to include women in the peace process, citing the Women, Peace, and Security Act of 2017 which Trump signed into law. Women’s rights icon Gloria Steinem, founder of the peace group Women Cross DMZ, published an op-ed in the Washington Post on Sunday in support of the resolution.

The resolution clarifies that ending the war does not necessitate a withdrawal of US troops from Korea or an acceptance of North Korea as a legitimate nuclear power. The resolution calls on the Administration to continue the repatriation of servicemember remains, and expand cooperation to achieve reunions of divided Korean and Korean-American families and facilitate people-to-people exchanges and humanitarian cooperation.

Rep. Khanna has been a consistent voice for diplomacy on the Korean Peninsula. Shortly after Trump threatened “fire and fury” against North Korea, Khanna was joined by over 70 Congressmembers on his bipartisan “No Unconstitutional Strike on North Korea Act”, which would reinforce existing law prohibiting an unauthorized and unprovoked strike on North Korea. He has also been critical of those in both parties who have sought to restrict flexibility in negotiations, instead urging support for the diplomatic approach of our South Korean ally and its President, Moon Jae-in.

Rep. Khanna will travel to Atlanta next week to sit down with Pres. Carter to discuss developments on the Korean Peninsula and solicit guidance from the Nobel Laureate about how the next generation of policymakers can best pursue a pro-diplomacy agenda for America.