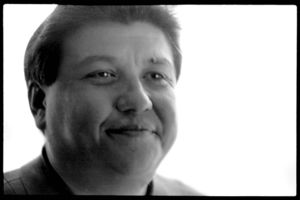 In May 1992 the Communist Party USA newspaper Peoples Weekly World published a May Day supplement which included a call to "support our continuing struggle for justice and dignity".

In 1995 the Communist Party USA newspaper People's Weekly World, published a "May Day salute" to the "heroes in the class war zone". More than 200 unionists endorsed the call, mostly known affiliates, or members of the Communist Party.

Jerry Acosta, Utility workers, Downey California, was one of those listed[2].

The Southern California Friends of the People's Weekly World tribute to two of Los Angeles' finest labor leaders, Jerry Acosta and Gilbert Cedillo, became a dynamic rally of elected officials, activists, labor and community leaders in solidarity with labor struggles and in the fight to defeat the ultra-right in November...

"The People's Weekly World and all of us in this room feel very strongly about who we honor today," said Evelina Alarcon, chair of the Southern California District and national secretary of the Communist Party USA, one of the emcees of the tribute. "Jerry Acosta and Gilbert Cedillo represent the new fightback vision of the Sweeney, Trumka, Chavez-Thompson leadership in the AFL-CIO. They represent the rank and file that is pushing from the bottom for that new vision!"

According to the World, Los Angeles City Councilman Richard Alarcon, brother of Communist Evelina Alarcon, spoke on behalf of the council which adopted a resolution honoring Acosta and Cedillo;

"Gil Cedillo and Jerry Acosta have changed the whole dynamic of what it means to be for the working class and what it means to fight for workers rights. Because of them and other labor leaders, we have seen a resurgence of strength of the least empowered in our country..."

Presentations to the honorees were also made by Clara James, chair of the Community Affairs Commission of the Second Baptist Church, on behalf of Congresswoman Maxine Waters and Antonio Aguilar, on behalf of State Senator Hilda Solis, California's first Latina elected to the State Senate, who, along with labor, led the drive to put a minimum wage increase initiative on the ballot...

H.R. 950, the Job Creation and Infrastructure Restoration Act of 1997 was introduced in the 105th Congress on March 5, 1997 by Congressman Matthew Martinez of California. It had 33 original co-sponsors, . The primary purpose of this emergency federal jobs legislation was to provide much needed jobs at union wages to crisis ridden cities by putting the unemployed to work rebuilding our nation's infrastructure (schools, housing, hospitals, libraries, public transportation, highways, parks, environmental improvements, etc. $250 billion is authorized for emergency public works jobs over a five year period.

Congressman Martinez had previously introduced this bill in the last Congress (as HR 1591) at the the request of over 50 prominent Labor leaders who formed the Los Angeles Labor Coalition for Public Works Jobs, which is why it is often referred to as the "Martinez Public Works Jobs Bill."[4]

This is the most significant jobs legislation introduced in Congress since Franklin Delano Roosevelt's New Deal established the Works Progress Administration (WPA). This bill is the WPA-type program for today. It has strong provisions which will put hundreds of thousands of unemployed building trades workers to work as well as provide jobs for victims of plant closures, welfare recipients who are parents, youth, and the long term unemployed. The public works projects which will be established under this bill will be built in communities with the highest levels of unemployment and with the greatest needs.

The goal of the New York Coalition for Public Works Jobs is to build the movement to pass the Martinez Jobs bill as part of the National Labor Coalition for Public Works Jobs. You can help by asking your union, community organization, or local government body to to join those who have already passed resolutions to endorse the bill. Such a resolution has been introduced in the New York City Council. Calling on additional Congressional Representatives to co-sponsor the bill is very important. We will be organizing petition campaigns, visits to elected officials, and demonstrations and other actions for a public works jobs program.