Assemblyman Herman D. Farrell, Jr. was elected to the State Assembly in 1974 from a district that encompasses West Harlem, Washington Heights and Inwood.

In March of 1994, Assembly Speaker Sheldon Silver appointed Mr. Farrell Chair of the Assembly Ways and Means Committee. He is also a member of the Rules Committee and the Black, Puerto Rican, Hispanic and Asian Legislative Caucus, as well as the New York State Assembly Puerto Rican/Hispanic Task Force. From 1979 until 1994, Farrell was Chairman of the Assembly Banks Committee. In 1983, Governor Cuomo appointed him to the Temporary Committee on Interstate Banking. From 1981 to 1984, he conducted a course at the New School for Social Research on Banking in New York. In 1981-82, he was Chairman of the Subcommittee on Financial Institutions of the National Conference of State Legislators.

Among the legislation Assemblyman Farrell is proudest of is the passage of the Omnibus Consumer Protection and Banking Legislation Act. The provisions of this landmark act include consumer protections in the auto leasing industry; the establishment of a toll-free number at the New York State Banking Department to enable consumers to receive free information on credit card interest rates, fees and grace periods; and a requirement that banks provide low-cost lifeline checking accounts. In addition, the bill prohibits discrimination based on residency in the opening of bank accounts, and requires banks to make annual reports of the number and amount of small business and small farm loans.

Assemblyman Farrell's accomplishments in the Legislature began with the Neighborhood Preservation Companies Act, pioneer legislation that enables the state to fund community groups to provide tenant advocacy and fight housing abandonment in their neighborhoods. Other legislation that Farrell is responsible for includes the passage of check clearing legislation that requires banks to clear checks in a shorter period of time and to notify depositors of the time it takes to clear checks. Legislation was also passed requiring banks to disclose their interest rates and other pertinent information in chart form, clearly marked in boldface type, on all mail solicitations. These two state banking laws became the model for federal legislation. He also strengthened anti-redlining laws by requiring stricter enforcement of community reinvestment provisions and was successful in passing legislation to monitor bank branch closings.

Prior to Assemblyman Farrell's election to the Assembly, he was the Assistant Director of the Mayor's office in Washington Heights, and had been a Confidential Aide to a State Supreme Court Justice.

When Ed Koch lied about Basil Paterson, first in interviews, and then, more maliciously, in his book, some Jews did speak up, as best they could, including Rabbi Balfour Brickner, Haskell ­Lazerre of the American Jewish Committee, union leaders Jack Sheinkman and Victor Gotbaum, Sol Stern, Victor Kovner, and Letty Pogrebin.

When Jesse Jackson lied, and then admit­ted his bigoted “Hymie/Hymietown” slur against Jews, some black leaders did speak up, as best they could, including Basil Paterson,­ the Amsterdam News, Julian Bond, Reverend Calvin Butts, col­umnist William Raspberry, Denny Farrell, David Dinkins, Carl McCall, and Al Vann.[4] 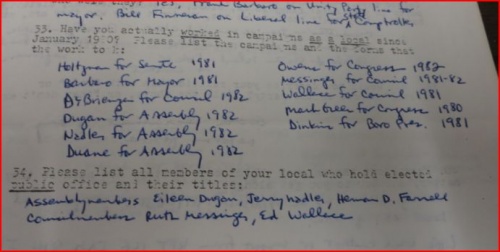 Denny Farrell was identified as a member of Democratic Socialists of America in DSA's Democratic Left, January 1983 issue, page 14

In New York, DSA State assembly members now include Eileen Dugan, Denny Farrell, and Jerry Nadler. Ed Wallace remains on the New York City Council, as an at large member, while Ruth Messinger was re-elected to the council...

According to Danny Rubin of the People's World, "Bill Thompson will have the overwhelming vote of the African American and the Afro-Caribbean community, where his roots are. He has strong ties in Brooklyn where both he and his father had long political careers, and has been endorsed by Bronx Congressman Jose Serrano, state Senator Jose Serrano, Jr., Bronx Borough President Ruben Diaz, Jr., and the Bronx Democratic Party. . As well, Thomson has the endorsements of a growing number of African American elected officials, including Manhattan Democratic Party leader Denny Farrell, State Assemblyman Karim Camara, Congressman Gregory Meeks and the Rev. Floyd Flake.[6]