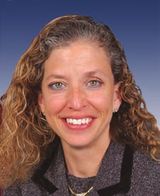 Template:TOCnestleft Debbie Wasserman Schultz is a Democratic member of the United States House of Representatives, representing the 20th district of Florida. She serves as the Majority Deputy Whip.

Debbie Wasserman Schultz was born in 1966 on Long Island, NY. She attended the University of Florida and graduated with a Bachelor’s Degree in Political Science in 1988 and with a Master’s Degree in 1990. She has been married to Steve Schultz for 20 years and together they have three children. The Congresswoman is proud to call South Florida home where she resides with her family in Weston.[1]

The Council for a Livable World, founded in 1962 by long-time socialist activist and alleged Soviet agent, Leo Szilard, is a non-profit advocacy organization that seeks to "reduce the danger of nuclear weapons and increase national security", primarily through supporting progressive, congressional candidates who support their policies. The Council supported Debbie Wasserman Schultz in her successful House of Representatives run as candidate for Florida.[2]

In September 24, 2010, the Committee of Veterans of Foreign Wars endorsed Debbie Wasserman Schultz for office.[3]

On the Tea Party

Reporter: "You call Allen West a Tea Party extremist - is there any difference to what is going on here, you guys campaigning on a street corner waving signs..."
Wasserman Schultz: "I don't see any swastikas or any pictures of the President in black face, or burned in efigy here. The difference between the way we exercise our First Amendment right and the way I've seen Tea Party extremists, - Republican Tea Party extremists express their right is dramatically different..."
Reporter: "But not all Tea Party... I agree there's a few fringe..."
Wasserman Schultz: "Not all. But they certainly have welcomed those images and not repudiated them, not asked them to leave..."

In early 2009, Wasserman Schultz hosted an event on Capitol Hill with JStreet, a group then under fire for issuing a statement accusing Israel of collective punishment in Gaza and equating Israeli self-defensive measures with those of Hamas. JStreet's comments were so incendiary, they drew immediate condemnation from all corners of the Jewish community, including noted liberal Rabbi Eric Yoffie, who called the group "profoundly out of touch."

Yet Wasserman Schultz, only weeks later, showed her support for J Street (here and here), calling the controversial group an "organization that supports Israel and supports peace and is working to foster an advanced peace process," placing her at odds with even the most liberal of Jewish Democrats. She also compared the group to pro-Israel stalwart AIPAC, described JStreet's goals as "worthy as well," and later served as featured speaker for JStreet's first annual gala event in Washington, DC, despite many of her colleagues choosing to disavow the event.

"We are deeply troubled by incoming DNC Chairman Wasserman Shultz's embrace of groups, such as J Street, that undermine Israel's security," RJC Executive Director Matt Brooks said. "In blindly conferring legitimacy for fringe groups like J Street, she has raised serious questions about her own credibility and judgment."

Brooks added, "As the chairman of the DNC, Wasserman Schultz will be under increasing pressure to yield to the fringe left of the Democratic Party and further strengthen her ties to anti-Israel groups like JStreet and anti-Israel donors like George Soros."[5] 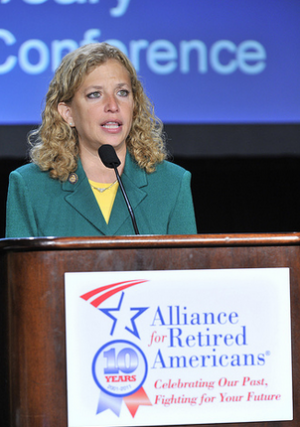 In 2013 Progressive Democrats of America assigned activists to deliver their material to almost every US Congressman and Senator, Ed Wujciak, was assigned as the contacts for Rep. Wasserman Schultz. In June it was Fritzie Gaccione.[7][8]

Wasserman Schultz received $1000 in lobbying funds from Planned Parenthood in 2008.

Wasserman Schultz has been supported by EMILY's List during her campaigning.

As of 2012, officers of the Democratic National Committee were;[9]

In the 113th Congress, 50 members of the House of Representatives belonged to the New Democrat Coalition, including:[10]

"Clearing a path" for Hillary"

The Democratic National Committee is 'clearing a path' for Hillary Clinton to be its presidential nominee because its upper power echelons are populated with women, according to a female committee member who was in Las Vegas for October 2015's primary debate.

Speaking on the condition that she isn't identified, she told Daily Mail Online that the party is in the tank for Clinton, and the women who run the organization decided it 'early on.'

The committeewoman is supporting one of Hillary's rivals for the Democratic nomination, and said she spoke freely because she believes the former Secretary of State is benefiting from unfair favoritism inside the party.

Clinton aims to be the first female to occupy the Oval Office, and 'the party's female leaders really want to make a woman the next president,' the committeewoman said, rattling off a list of the women who she said are the 'real power' in the organization.

'I have nothing against women in politics,' she underscored. 'But it's not healthy for the party if we get behind a woman because she's a woman, and risk having her implode after she's nominated because she isn't tested enough now.'

Democratic National Committee chairwoman Debbie Wasserman Schultz, along with vice chairs Donna Brazile and Baltimore Mayor Stephanie Rawlings-Blake , are part of a female cabal dead set on putting a woman in the White House, according to a DNC committeewoman.

Five of the nine elected leaders of the DNC are women, including chair Debbie Wasserman Schultz – a Florida congresswoman – and a majority of the vice chairs.

Before Wasserman Schultz assumed her post at the DNC, she eagerly campaigned for Clinton during the then-New York senator's 2008 presidential run.

From 2004 - 2010, the following organizations made donations to Wasserman Schult's campaigns:[12]

Three brothers who managed office information technology for members of the House Permanent Select Committee on Intelligence and other lawmakers were abruptly relieved of their duties, on suspicion that they accessed congressional computers without permission.

Brothers Abid Awan, Imran Awan, and Jamal Awan were barred from computer networks at the House of Representatives Thursday February 2, 2017.

Three members of the intelligence panel and five members of the House Committee on Foreign Affairs were among the dozens of members who employed the suspects on a shared basis.

Also among those whose computer systems may have been compromised is Rep. Debbie Wasserman Schultz, the Florida Democrat who was previously the target of a disastrous email hack when she served as chairman of the Democratic National Committee during the 2016 campaign.

The brothers are suspected of serious violations, including accessing members’ computer networks without their knowledge and stealing equipment from Congress.

Jamal handled IT for Rep. Joaquin Castro, a Texas Democrat who serves on both the intelligence and foreign affairs panels.

“As of 2/2, his employment with our office has been terminated,” Castro spokeswoman Erin Hatch told TheDCNF Friday.

Jamal Awan also worked for Louisiana Democrat Rep. Cedric Richmond, who is on the Committee on Homeland Security.

Imran worked for Reps. Andre Carson, an Indiana Democrat, and Jackie Speier, a California Democrat. Both are members of the intelligence committee. Imran Awan, also worked for the House office of Wasserman Schultz.

Then-Rep. Tammy Duckworth, an Illinois Democrat, employed Abid Awan for IT work in 2016. She was a member of House committees dealing with the armed services, oversight, and Benghazi. Duckworth was elected to the Senate in November, 2016. Abid Awan has a prior criminal record and a bankruptcy.

Abid Awan also worked for Rep. Lois Frankel, a Florida Democrat who is member of the foreign affairs committee.

The three men are “shared employees,” meaning they are hired by multiple offices, which split their salaries and use them as needed for IT services. It is up to each member to fire them.

A criminal investigation into five unnamed people began late last year related to serious and potentially illegal violations of House IT policies. Chiefs of staff for the members were briefed Thursday by the Sergeant-at-Arms.

Capitol Police spokeswoman Eva Malecki said the investigation was still ongoing, and arrests have not been made but staff were “asked to update their security settings.”

The Sergeant-at-Arms told staff that the subjects were four men who were brothers and one woman. It did not name them. It quoted one of the affected members as saying “they said it was some sort of procurement scam, but now I’m concerned that they may have stolen data from us, emails, who knows.”

The three brothers have all shared a house in Lorton, Virginia, that is owned by Hina Alvi. Alvi is a female House IT employee who works for many of the same members as the three brothers, as well as the House Democratic Caucus. Alvi has worked for reps Gregory Meeks, Yvette Clarke, Dave Loebsack, and Emanuel Cleaver.

Signs of trouble have long been visible in public records. The Congressional Credit Union repossessed Abid’s car in 2009, and he declared bankruptcy in 2012, facing multiple lawsuits.

Alvi, who did not respond to TheDCNF’s request for comment, has taken multiple second mortgages.

Jack Langer, spokesman for the intelligence committee, said the committee office has its own IT staff and security measures and classified information from the panel is not allowed to be sent to members’ personal offices.[14]

The following have worked as staff members for Wasserman Schultz:[15]

“From Birmingham to Broward; Black Women Rise Up!”

The discussion kicked off with a Q&A session with Alabama Congresswoman Terri Sewell.

Sewell also voiced the need for people in positions of power to use their influence to break down barriers for others. “It’s not enough to be the first this and the first that, it’s about breaking down the doors so that others can come in behind me.”

The event ended with a short panel discussion led by Rep. Wasserman Schultz where Nancy joined Dania Beach Mayor Tamara James, Lauderdale Lakes Mayor Hazelle P. Rogers and Rep. Terri Sewell in a conversation about issues that impact Black communities. For Nancy, the opportunity to join these trailblazers on a panel was an honor that she’ll never forget. “It was beautiful to see unapologetically black women on stage in the powerful roles that they play. Young girls will look at them and say: I can do that too.”[16]