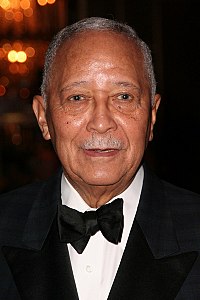 David Norman Dinkins was born on July 10, 1927, in Trenton, New Jersey. He was raised in Trenton until the Depression, when his family moved to Harlem.

Dinkins served as a Marine during World War II. After receiving a B.S. in mathematics from Howard University in 1950, Dinkins married Joyce Burrows in 1953. He went on to graduate from Brooklyn Law School in 1956 and then started a private law practice that he maintained until 1975[1].

Dinkins rose through the Democratic Party organization in Harlem and became part of an influential group of African-American politicians that included Percy Sutton, Basil Paterson, Denny Farrell, and Charles Rangel. As an investor, Dinkins was one of fifty African American investors who helped Percy Sutton found Inner City Broadcasting Corporation in 1971. He served briefly in the New York State Legislature and for many years as New York City Clerk.

He was named Deputy Mayor by Mayor Abraham D. Beame but was ultimately not appointed. He was elected Manhattan Borough President in 1985 on his third run for that office. He was elected the city's mayor on November 7, 1989, having defeated three-term incumbent Mayor Ed Koch and two others to win the Democratic nomination and going on to narrowly defeat Rudy Giuliani, the Republican candidate.[2]

In 1977, both Manhattan Borough president candidates David Dinkins (then City Clerk) and Ronnie Eldridge were members of the Democratic Socialist Organizing Committee.[3]

DSOC works within the Democratic Party, said Harrington, because of the party's relationships with organized workers, blacks, feminists, environmentalists and other "progressive groups."

The Socialist Caucus circulated a list of convention delegates who were caucus members, including;[4]

The Great Peace Marchers arrived in New York, October 23 1986, after trekking 3,500 miles with their message of global nuclear disarmament.

The following Friday, the Communist Party USA's People's Daily World sponsored a reception for 25 of the marchers at Unity Auditorium on West 23rd St.[5]

In 1988 David Dinkins was chair of the New York Jesse Jackson, Jr. delegation to the DNC.[6]

In the 1990s David Dinkins was a member of Democratic Socialists of America[8].

Empowerment '92: A Call to Action Conference, was held June 6 to 9, 1992. African American community activists, joined with trade unionists, politicians, peace activists, environmentalists and others to discuss how to change the nation's priorities as the economic crisis deepens.

Of the upcoming conference DC Statehood Senator Jesse Jackson said..."We issue this Call to Action to reaffirm and reassert our vision of a true world order, one based on peace, justice and human priorities. our message, translated into action can, and must srt a new direction for our nation".[9]

The clemency offers came after a long campaign that saw 75,000 people sign a petition in Puerto Rico and the US. The campaign, led by the Pro-Human Rights Committee of Puerto Rico, involved such activists as Coretta Scott King, Rev. Jesse Jackson, Bishop Desmond Tutu, Rigoberta Menchu and Dr. Aaron Tolen, President of the World Council of Churches.

Dinkins established a legacy of working to empower poor people and minorities. Elected to the New York State Assembly in 1966, he helped create the Search for Education, Elevation and Knowledge (SEEK) program, which provided grants and educational assistance to low-income students. He established guidelines that encouraged wider voter registration as president of the New York City Board of Elections, a post he held from 1975 until he became the president of the borough of Manhattan in 1985.

Dinkins has continued to be critical of problems within the criminal justice system, including abusive police and institutionalized racism in the courts. In 1999, his beliefs led to his arrest along with approximately 1,200 others while protesting the shooting of Amadou Diallo, an unarmed immigrant from West Africa who was shot by police.

Dinkins currently serves as professor of public affairs at the Columbia University School of International and Public Affairs. He hosts Dialogue with Dinkins, a public affairs radio program, and is a member of the Council on Foreign Relations and the board of the American Stock Exchange, among many other organizations[15].

“I am honored to serve as honorary chair of MCNY’s Anniversary Gala,” said Mayor Dinkins. “For half a century, MCNY has not only produced professional citizens in New York City, but those who are also socially-responsible and share a commitment to give back and make our society a better place for all New Yorkers.”