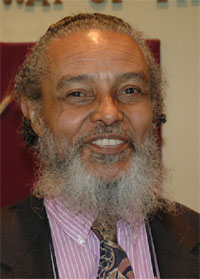 He serves in his office with an understanding of the history of poor and working class people and with a belief in democratic citizen control.

In the Legislature, Rushing's priorities are human and civil rights and liberties; local human, economic and housing development; environmental justice and health care for all.

Byron Douglas Rushing was born in New York City on July 29, 1942. His father, William Rushing worked as a janitor in the Washington Heights neighborhood of New York City. His mother, Jamaican native Linda Turpin, migrated to New York City working as a seamstress. The family moved to Syracuse, New York where Rushing attended Madison Junior High. He was praised for his public speaking, and entered various oratorical contests. He also attended a youth summer camp, under the direction of the Universalist Unitarian Church, which taught world peace and cultural understanding by bringing various racial, ethnic, cultural, and religious groups together. Rushing attended this camp throughout high school.[2]

In 1960, Rushing graduated from Syracuse Central High School. Members of the Quaker church whom he met at his summer youth camp invited him to participate in another youth summer program operated by the American Friends Service Committee. Rushing was able to travel through Eastern and Western Europe. In the fall of 1960, Rushing attended Harvard University in Cambridge, Massachusetts. At the end of his junior year, Rushing decided to postpone his studies and fully dedicate his efforts to the Civil Rights Movement. He returned to Syracuse to work with the local chapter of CORE (Congress of Racial Equality) tackling issues of employment integration and police brutality.[2]

Rushing moved to Boston, Massachusetts in 1964 to work for the Northern Student Movement. He operated programs of youth tutoring, and voter education and registration. During this time, Rushing volunteered for various programs involving the Episcopalian church, his religious faith. He was hired by St. Johns Church to set up a community information center. The Massachusetts Council for Churches then hired Rushing to establish a community organizing project called Roxbury Associates. It was at Roxbury Associates where Rushing met his first wife, Andrea Benton.

From 1967 to 1969, Rushing worked as an orderly at Rochester General Hospital. In 1969, Rushing returned to Boston as the Director of the Urban Change Program for the Urban League. Between 1972 and 1985, he worked as President of the Museum of Afro-American History. As President, he helped raise money for the purchase and restoration of what was cited as the oldest African American church building in the United States - the African Meeting House.[2]

Boston Democratic Socialists of America's annual Debs-Thomas-Bernstein Dinner was held on June 1 1995, at the Dante Aligheri Center in Cambridge. 1995's honorees were Byron Rushing, a longtime civil rights activist who represents Boston's South End in the Massachusetts House of Representatives, and Carin Schiewe, the direct or of the Commonwealth Coalition, a grassroots alliance working to elect progressive candidates to the State House.

A special Michael Harrington Award was given to Lewis Coser, the distinguished sociologist who was a founding member of DSA and a founding editor of Dissent magazine.[3]

On August 18, 2001 the Boston Chapter of Democratic Socialists of America held a forum to discuss the future of Democratic Socialists of America, both nationally and locally; whether to endorse various candidates and referenda; and the Bush Administration’s Faith-based Initiatives. The forum, moderated by Judith Deutsch (member of the Religious Socialism Commission), included The Rev. Alexander Hurt, pastor of Kingdom Church in Brockton, MA; the Honorable Byron Rushing, Massachusetts Legislature, , a civil rights activist of the 1960s, is now involved in struggles from East Boston (opposing Logan Airport expansion) to Haiti (exposing U.S. “structural adjustment” policies); Rev. Eugene Rivers,founder of the Ten Point Coalition and the Ella Baker House in Dorchester; and the Rev. Norm Faramelli, an editor of Religious Socialism. Afterwards a barbecue party was held in the in the Cambridge backyard of Executive Board member Allen Graubard.[4][5]

On June 13, 2002 Boston Democratic Socialists of America presented its 25th Annual Debs–Thomas–Bernstein Awards to "leaders who fight for democracy, here at home and around the world". State Representatives Pat Jehlen and Anne Paulsen, Co-Chairs of the Progressive Legislators Group received the award. Ellen Feingold, the earliest known recipient (1979) spoke on the history of the organization. David Knuttunen and Susan Davidoff were benefactors of the reception. Byron Rushing was a patron of the reception.[6] 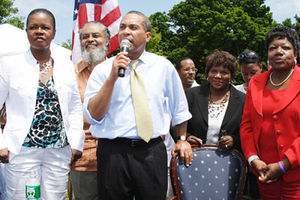 After NAFTA gave corporations the right to sue governments, "they are attacking environmental laws and collecting millions of dollars in “anticipated lost profits.”" In 2001 Rep. Byron Rushing asked the Massachusetts state legislature to set up a commission and study the effect of trade agreements on state laws and sovereignty. Global activists are setting up hearings on the Globalization Impact Bill in as many legislative districts as possible. Contacts for setting up local hearings included Eric Weltman at CPPAX and Dave Lewit at the Alliance for Democracy. [9]

In response to these developments, the Massachusetts Globalization Impact Bill H.2119, sponsored by Rep. Byron Rushing and written by David Lewit of the Boston-Cambridge Alliance for Democracy, addresses the impact of globalization on state lawmaking powers. It would set up a Commission of 3 Representatives, 2 Senators, the Attorney General, the Treasurer, and 2 appointees of the Governor’s, to study the impact of these trade agreements on our state’s municipalities and regulatory framework. Early sponsors include Rep. Pat Jehlen, Rep. Paul Demakis and Sen. Dianne Wilkerson. The bill is currently lodged in the House Ways & Means Committee, chaired by Rep. John Rogers of Norwood; as of May there is legislative support from just over a dozen members in the House. A minimum of 80 votes will be needed to pass this legislation.

Byron Rushing successfully sponsored legislation to create the Commission to develop a comprehensive plan to end homelessness in the Commonwealth; that Commission which he co-chaired with Undersecretary Tina Brooks released its report and 5-year plan in 2008. The plan has been adopted by the Deval Patrick administration.[11]