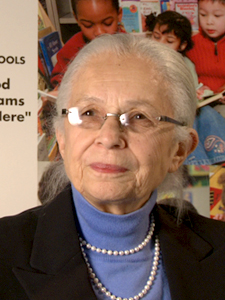 Template:TOCnestleft Barbara Taylor Bowman is a Chicago based early education expert and advocate. She is the daughter of Robert Taylor, a former head of the Chicago Housing Authority.

Barbara Bowman and her husband, Dr. James E. Bowman, are the parents of one daughter, Valerie Jarrett.

For many years, Bowman taught at both the preschool and elementary levels, but in 1966 she helped found the Erikson Institute, where she pioneered the teaching of early childhood education and administration. She has become a sought-after expert and tirelessly pursues higher quality and more extensive training for early education practitioners. Taking her expertise abroad, she has consulted with universities in China and Iran. In addition, she has directed training programs for Head Start teachers, teachers in inner-city schools, caregivers of at-risk infants, and for a Child Development Associates program on Native American Reservations[2].

Bowman maintains a professorship at the Erikson Institute and is the chief officer of the Office of Early Childhood Education for the Chicago Public Schools. She has served on the boards of the Great Books Foundation, the National Board for Professional Teaching Standards, Roosevelt University and the Family Resource Coalition. She is the chairperson of the Committee of Early Childhood Pedagogy for the National Research Council, for which she served as a member of its Committee on the Prevention of Reading Difficulties in Young Children[3].

The Erikson Institute is named after pioneering child educationalist Erik Erikson, an errant disciple of Sigmund Freud and coiner of the phrase "identity crisis".

In 1950 Erikson became a cause celebre on the left after leaving the University of California rather than sign an anti-communist loyalty oath.

For many years Bowman has run the Chicago based Erikson Institute. An early Erikson board member was Chicago businessman and "liberal" activist Tom Ayers-father of Weather Underground terrorist leader and long time Barack Obama friend and colleague Bill Ayers.

Bernardine Dohrn, has also served on the Erikson board in recent years[4].

Tom Ayers served as a trustee of the Erikson Institute. The Institute distributed $46,025 in Northern Trust scholarships. At the time, the Erickson Institute Board of Trustees also included Ayers' convicted felon daughter-in-law, Bernadine Dohrn Ayers. In addition, the Institute's co-founder, Barbara Bowman, is the mother of close Obama adviser Valerie Jarrett.

In an obvious reference to Barbara Taylor Bowman, Bill Ayers wrote on page 82 of his book, "A Kind and Just Parent", describing his Hyde Park neighborhood:

"Just south I see the Robert Taylor Homes named for the first head of the Chicago Housing Authority, whose daughter, a neighbor and friend is president of the Erikson Institute."

In March 2008 the Communist Party USA 's Peoples Weekly World reprinted an IPS article on the prospects for children under President Obama[6].

Some are hopeful that the new administration of President Barack Obama, who appears focused on children’s welfare and education, will reverse this decline.

"It is important to remember that for the first time in a long time we have a person who gets it," said Barbara Bowman, a consultant to the U.S. Secretary of Education, praising Obama for "(understanding) the importance of early childhood care and education."

Business and Professional People for the Public Interest

As of February 2010, Barbara Bowman served on the Board of Directors of the Chicago based Business and Professional People for the Public Interest.[7]