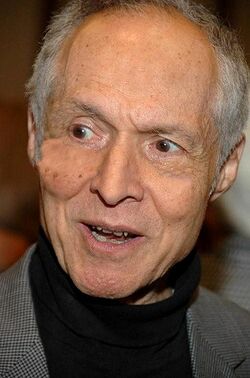 Al Fishman was a Detroit socialist. He is the father of the late Marcia Fishman. Still very active, he died in May 2011, of a heart attack at age 83.

The far left Detroit City Council passed a resolution mourning his loss, calling Fishman "one of our city's finest peace, civil and human rights, and labor activists, advocates and champions, one of our true citizens of the world."

Sam Webb, national chair of the Communist Party USA, said Fishman "will be greatly missed and never replaced. He was the real article - an activist volunteer extraordinaire. And while he labored in the vineyards of justice and equality for his entire life in his beloved city of Detroit, he never lost his vision of the righteousness of democratic socialism."

Pat Fry of the Committees of Correspondence for Democracy and Socialism wrote in an email of Al's belief that "the widest possible front must be formed targeting the far right-wing, particularly in the electoral arena."

Keith Gunter, Peace Action of Michigan co-chair, said, "Al meant so much to all of us. Not only was he an extraordinary activist, but also an extraordinary friend." Reacting to the news of Fishman's sudden death, Gunter said, "I have the sensation of being hit with a baseball bat."

Vommunist and peace activist Michele Artt said Al Fishman never failed to stress that military spending came at the expense of jobs and the social needs of the nation as a whole and our urban areas in particular. "Al was a dear friend of the family. It is a personal loss as well as a terrible loss to the peace and justice community," she said.

Fishman's son Dan Fishman said he "was not surprised at all" by the huge outpouring from the community upon his father's death. "He's been here so long, so active, so many causes," he said.

Dan Fishman said he had spoken to children of other activists who sometimes felt neglected by their parents' outside commitments. But he said he and his sister Marcia Fishman of Atlanta (who passed away two years ago after a five-year battle with cancer) never felt neglected. The activism of their parents was a teaching and learning process that enriched their lives, he said.[1]

Al Fishman was born and grew up in New York City. After serving in World War II he moved to Ann Arbor, Mich., to attend the University of Michigan on the GI Bill. He became active in the 1948 Progressive Party presidential campaign of Henry Wallace, where his long life of activism began. It was also then that he began to study Marxism and joined the Communist Party USA , an organization he was active in for many years.

He married Margaret Radulovich in 1951 and they had two children, Marcia and Daniel. Margaret's political activity got her brother, Milo Radulovich, discharged from the Air Force in 1953. The case was taken up by newscaster Edward R. Murrow, and "eventually brought the downfall of Sen. Joe McCarthy".

The City Council resolution in honor of Al paid tribute to his participation in protests against the murder of Emmett Till; the "racist frame-ups" of Willie McGee, the Trenton Six, and the Martinsville Seven, and the "frame-up of Julius Rosenberg and Ethel Rosenberg.

The resolution noted that while he was a member of the National Negro Labor Council he helped bring about Black representation in trade union leadership.

It noted his arrests for protesting apartheid at the South African Embassy in Washington, the Indonesian massacre in Dili, East Timor, and the continuing development of nuclear weapons at Los Alamos National Laboratory in Nevada, and in demonstrations supporting striking Detroit newspaper workers, and opposing the US invasion of Iraq.[2]

Al Fishman’s political activism in Detroit and the state of Michigan reaches back to the late 1940s. Fishman was state chairperson for the New Democratic Coalition of Michigan (1966-1971) and was involved in Detroit area political organizations such as North Detroit Citizens for McGovern (1972) and Turn Detroit Around (1973). Among other issues, the New Democratic Coalition of Michigan supported the candidacy of Eugene McCarthy and opposed American involvement in the war in Vietnam. Turn Detroit Around formed to attract white voters to support Coleman Young’s first mayoral bid and to support an interracial slate of Common Council candidates. Mr. Fishman was also vice-chairperson of Urban Alliance (1968-1970) as well as a Michigan Democratic Party state central committee member.[3]

Al Fishman, was longtime leader of Peace Action of Michigan.

Al Fishman and his wife Margaret were mainstays in Detroit politics for decades. They worked on the early campaigns for Coleman Young, Detroit's first African American mayor, as well as Congressman John Conyers, and progressive City Council members Erma Henderson and Maryann Mahaffey. Al Fishman was a leader in the state presidential campaign of George McGovern in 1972.

One of"Al and Margaret's proudest deeds" was hosting Hortensia Allende, widow of Chile's President Salvador Allende, in their home a year after the 1973 coup in which President Allende was killed.

Al Fishman's last several decades were devoted to the peace movement as a leader in Peace Action and its predecessor, SANE-Freeze.

A veteran of many national rallies in Washington, Fishman was still riding the bus from Michigan for the One Nation Rally in the nation's capital last fall, again declaring "this is probably the last one."[4]

In 1991 "Al F", Michigan was one of several hundred Communist Party USA members to sign the a paper "An initiative to Unite and Renew the Party" - most signatories left the Party after the December 1991 conference to found Committees of Correspondence.[5]

The Conference on Perspectives for Democracy and Socialism in the 90s was the Committees of Correspondence's first national conference held in Berkeley, California July 17-19, 1992.[6]

Workshops that were held at the conference on Saturday, July 18 included:[7]

Peace and Solidarity Taking apart the military behemoth. How can we win disarmament agreements, end military interventions, and convert our militarized economy to a peacetime orientation?

In May 1992 the Communist Party USA newspaper Peoples Weekly World published a May Day supplement which included a call to "support our continuing struggle for justice and dignity".

In 2007 Al Fishman was involved with the Detroit Area Peace with Justice Network .[9]

Al Fishman attended the 6th National Convention of the Committees of Correspondence for Democracy and Socialism (CCDS) at San Francisco's Whitcomb Hotel July 23-26 2009[11]. At a forum on CCDS's approach to elections Fishman said "I defy anyone here...to argue that it makes no difference or is not important that John Conyers is our Congressman from Michigan." He had no takers.

The Detroit City Council designated its main chamber - the Committee of the Whole Room - as a Peace Zone in memory of Al Fishman, lifelong peace activist who was a member of Committees of Correspondence for Democracy and Socialism, and participated on the Peace and Solidarity Task Force. The resolution, introduced by Council Member JoAnn Watson, states that Al Fishman was "one of our City’s finest Peace, Civil, Labor and Human Rights activists, advocates and champions, one of our true Citizens of the World." [12]

In 2009, Al Fishman was member of Democratic Socialists of America in Detroit[13].

DSA member Al Fishman spoke to the audience about how the disastrous wars in Iraq and Afghanistan had undermined Obama’s domestic agenda in a manner analogous to the way in which the Vietnam War undermined President Johnson’s Great Society programs. DSA Executive Board member Dave Ivers spoke about the imperative for a national jobs program, shared a personal anecdote about how the health care crisis had affected his family, and stressed the importance of Congress passing the Employee Free Choice Act to make it easier for workers to organize unions. Other speakers included Chris Michalakis, Legislative Director of UFCW Local 876, who spoke about the importance of comprehensive immigration reform. Luke Canfora of Repower America described the huge potential benefits of investment in renewable energy (decreased reliance on foreign oil, reduced emissions of greenhouse gases, and job creation). Marcia Boehm and Altheia Henry discussed the urgent need for health care reform. John Freeman, Michigan Director of Health Care for America Now, moderated the event.[14]