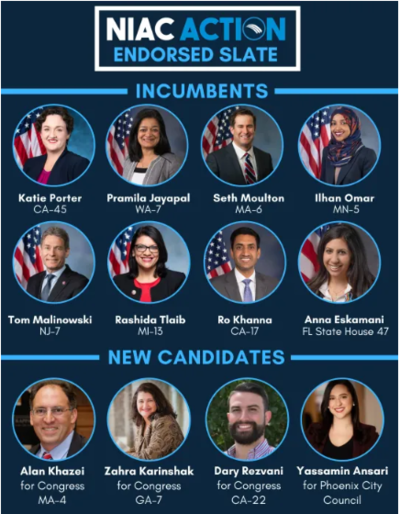 The 2020 Election may be the most critical vote in our lifetime. It is more important than ever that Iranian Americans and our allies have a powerful voice at the ballot box.

That’s why we are excited to announce NIAC Action’s first 2020 endorsements – our largest ever single wave of endorsements!

We have an opportunity to elect more Iranian Americans into office than ever before.

And we have our best chance ever to send the first Iranian American to the U.S. Congress!

We have identified twelve champions of our community – incumbent members of Congress who have worked to prevent war and end Trump’s ban on our families, and Iranian Americans who are ready to make an impact in all levels of government. With your help, we can elect them to office and bring real change in 2020.

By making a donation to NIAC Action PAC, you can help elect these champions of our community and send a powerful, united message that Iranian Americans will not be ignored on the political stage.

State Senator Zahra Karinshak is a former federal prosecutor and U.S. Marine veteran who is proud of her Iranian American heritage. NIAC Action was proud to endorse Zahra in her 2018 race to win her state senate seat and looks forward to her repeating her victory on the national stage.[1]

She was also supported as a Candidate Georgia State Senate District 48 in 2018.