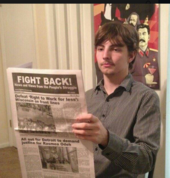 Zachary Schultz aka Eliza Schultz, is a Chicago activist. He is a member of Students for a Democratic Society.[1] Also a member of Freedom Road Socialist Organization/FightBack!.

Zachary Schultz - FRSO isn't planning to defeat imperialism at the ballot box but by building up the people's movements and constructing an organization capable of leading a revolution. The defeat of Trump in the election will improve the conditions for these tasks. 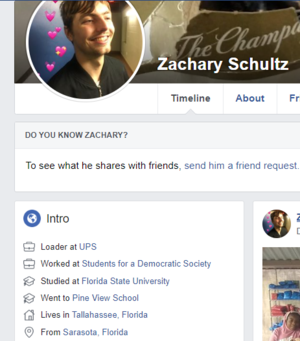 This year, we want to commemorate radical socialist women that have contributed immensely to the liberation of the working class. We want to provide a voice for all women and bring attention to different struggles.

Members of The Freedom Road Socialist Organization (FRSO), the Dream Defenders, Students for a Democratic Society (SDS), and the Center for Participant Education (CPE) and The F-Word will be hosting a panel in commem]]oration of International Women's Day to cover the most pressing issues faced by women, LGBTQ, and Trans folks in the United States and around the world. In addition the presentation will cover how the Freedom Road Socialist Organization continues to fight for Trans Proletarian Feminism and promotes Women's leadership against Patriarchy and Capitalism within the movement.

We will also celebrate women revolutionaries that have contributed to the struggle. Radical Communist revolutionaries like Claudia Jones, Leila Khaled, Assata Shakur, Yuri Kochiyama, Anuradha Ghandy, and many more.

The event ended with a speech by Tallahassee FRSO member Zachary Schultz who said, “The Day School represents a real development in the revolutionary movement among students. Students are wanting and ready to take up Marxism-Leninism, the theory of revolution. Students are learning and organizing to build the movements of oppressed nationalities and workers to overthrow the capitalists.”[4]

On Thursday, April 12 2018 at 8:00 PM in Union Room 320, Tallahassee Students for a Democratic Society will be holding a presentation and discussion about Francis Eppes, the history of racism at FSU, and the current movement to remove the statue and names honoring Eppes on campus. SDS members Maddie Hendrick, Katherine Draken and Jake Alvarez will present and a time for questions and discussion will follow.