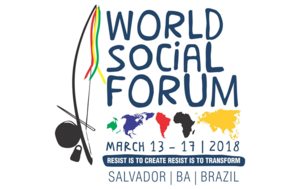 The World Social Forum (WSF) "was created in 2001 by organizations and social movements that were self summoned and mobilized for a huge meeting in Porto Alegre, in opposition to the neoliberalism represented by the World Economic Forum, which took place at the same time in Davos, in Switzerland."[1]

"Leading members of the global movement for social and economic justice organized the Forum, in response to the World Economic Forum meeting in Davos, Switzerland. In 2001, and the following two years, the World Social Forum was held in Porto Alegre, Brazil. The organizers of the World Social Forum make a point of convening the meeting in the global South, underscoring their view that this region should take leadership in the movement for progressive global social and economic policy."[2]

The World Social Forum was responsible for the Bamako Appeal. 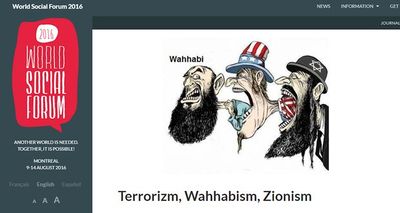 Canada asked the World Social Forum to "remove the Canadian government logo from its list of partners" in the wake of a "blatantly anti-Semitic cartoon" found on the WSF website:[3]

"The federal government has distanced itself from a major international gathering opening Tuesday in Montreal following complaints that its programming included anti-Semitic content.

"The World Social Forum, expected to draw more than 10,000 participants, was told last week to remove the Canadian government logo from its list of partners after two Liberal MPs expressed disgust over what they called a “blatantly anti-Semitic cartoon” on the event’s website.

"Along with eco-responsibility, accessibility and security, the Forum has identified 'non-apartheid' as one of its four key commitments, promising to censor pro-Israel viewpoints. 'We have already taken a stand to exclude all people, organizations or activities that promote any kind of oppression, supporting Palestinians and all the people struggling for their emancipation and freedom,' its website says. An accompanying document advises the boycott of academics, artists and products it links to 'Israeli apartheid.' The CIJA has identified 28 separate events that it says target Israel. Two of the event’s 21 major sessions deal with 'Israeli apartheid.'"

Seyyed Ali Mousavi, organized the workshop that featured the cartoon.[4]

The description of the workshop was:

"Islam is the religion of mercy and civilization. Islamic culture alien to Wahhabi fundamentalism terrorists. They are mercenaries of Saudi in the service of world Zionism-capitalism. They cooperate for Islamophobia by demonizaton of Islamic spirituality. They cooperate for misrepresentation, by accuse Palestinian freedom fighters by terrorism and legitimization crimes of fundamentalist regime in Israel."

After the workshop was shut down, Seyyed Ali Mousavi of the Center of religious dialogue for peaceful coexistence commented that the World Social Forum "is occupied by Israeli tanks and petrodollars Saudi Arabia."[5]

Bamako Appeal: the "campaign against capitalism"

In an article titled "The World Social Forum: From Defense to Offense,"[6] Immanuel Wallerstein of Agence Global wrote in part:

"The key idea is the creation of networks, which the WSF is singularly equipped to construct at a global level. There is now an effective network of feminists. For the first time, at Nairobi, there was instituted a network of labor struggles (defining the concept of "worker" quite broadly). There is now an ongoing network of activist intellectuals. The network of rural/peasant movements has been reinforced. There is a budding network of those defending alternative sexualities (which permitted Kenyan gay and lesbian movements to affirm a public presence that had been difficult before). There is an anti-war network (immediately concerned with Iraq and the Middle East in general). And there are functional networks on specific arenas of struggle - water rights, the struggle against HIV/AIDS, human rights.

The WSF is also spawning manifestos: the so-called Bamako Appeal, which expounds a whole campaign against capitalism; a feminist manifesto, now in its second draft and continuing to evolve; a labor manifesto which is just being born. There will no doubt be other such manifestos as the WSF continues. The fourth day of the meeting was devoted essentially to meetings of these networks, each of which was deciding what kinds of joint actions it could undertake - in its own name, but within the umbrella of the WSF.

Finally, there was the attention turned to what it means to say "another world." There were serious discussions and debates about what we mean by democracy, who is a worker, what is civil society, what is the role of political parties in the future construction of the world. These discussions define the objectives, and the networks are a large part of the means by which these objectives are to be realized. The discussions, the manifestos, and the networks constitute the offensive posture."