The Federation is a Soviet-controlled front that works closely with the IUS and other fronts in promoting Soviet foreign policy goals-whether détente and arms control or support for Third World terrorist movements. The WFDY's World Youth Congresses have served as occasions for introducing young radicals and Communists to terrorist leaders. The U.S. WFDY section is the Young Workers Liberation League, the youth arm of the Communist Party USA.[2]

According to participants Annalucia Vermunt (NZ) and Jacob Persso (USA) “We pledge that we shall remember this unity, forged in this month, November 1945 Not only today, not only this week, this year, but always Until we have built the world we have dreamed of and fought for We pledge ourselves to build the unity of youth of the world All races, all colors, all nationalities, all beliefs To eliminate all traces of fascism from the earth To build a deep and sincere international friendship among the peoples of the world To keep a just lasting peace To eliminate want, frustration and enforced idleness We have come to confirm the unity of all youth salute our comrades who have died-and pledge our word that skilful hands, keen brains and young enthusiasm shall never more be wasted in war”[1] 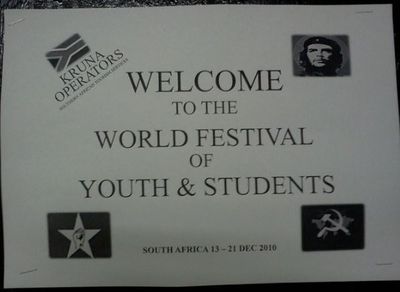 According to participants Annalucia Vermunt from New Zealand, and Jacob Perasso (USA), “Our assembly takes place under the conditions of the capitalist crisis on an international level,” said World Federation of Democratic Youth President Nikolas Papadimitriou at the opening of its 19th General Assembly in Havana Nov. 9-12, 2015. More than 130 delegates representing 62 organizations and 35 countries took part, marking the 70th anniversary of the federation’s founding.

The conference came on the heels of winning freedom for the Cuban Five and opening of diplomatic relations between Havana and Washington for the first time in six decades, said Yuniasky Crespo, first secretary of the National Committee of the Union of Young Communists of Cuba, welcoming delegates to the island.

The UJC organized a program in conjunction with the assembly that allowed delegates to learn more about political developments in Cuba, including a visit to a neighborhood Committee in Defense of the Revolution and a report about the political decisions at the organization’s 10th congress held in July.

A political highlight was an exchange with one of the Cuban Five, Fernando González. The Five, imprisoned by the U.S. government for their efforts to defend Cuba from attacks by counterrevolutionaries in Florida, are all free and leading political work in Cuba. “The Five spoke to the 10th UJC congress about the opportunity we have to fight to continue socialism and influence our own liberation” remarked Jose Maury del Toro, head of the UJC International Relations Department.

González emphasized that worldwide solidarity was key to winning freedom for the Five. Since their frame-up and imprisonment in 1998, the fight to free them was a centerpiece of the World Festivals of Youth and Students, organized by WFDY every four years.

“Young people must understand that now Washington is changing its methods, but not its policy objectives,” he said. “So we must always be alert and defend the cause of the Cuban Revolution. We continue to be a revolutionary, socialist and united country. Nothing will make us give in and change our principles.”

“Did the U.S. government try to buy you?” Bimal Rathnayake of the Socialist Youth Union of Sri Lanka asked.

“We knew we were in prison not because of who we are as individuals, but because of what we represent,” González replied. “Our imprisonment was an act of aggression by the U.S. government against Cuba.”

Francisco Santiago, a leader of Juventud Hostosiana of Puerto Rico, asked González about his experiences sharing a cell with Oscar Lopez for four years. López was framed up for his support for independence for Puerto Rico and has served more than 34 years in U.S. jails.

López is a man devoted to the cause of Puerto Rican independence and if necessary willing to die in prison for this cause, González said, adding it was a privilege to share his cell.

Hamdi Yusef, international secretary of the Saharawi youth organization UJSARIO, asked if González had a message to send to the hundreds of Saharawi youth in Moroccan jails as they continue their fight for the independence of Western Sahara.

“A message of optimism, confident that in spite of the circumstances I am sure the Saharawi will obtain victory,” he responded. “Some may not witness that victory, but it will be theirs.”

A wide range of political questions were discussed and debated at the assembly. The fight against imperialism is a central part of WFDY’s program, but member groups hold a wide range of views about world developments and what to do next. One debate focused on perspectives in Syria and the Middle East. Iraklis Tsavdaridis, of the World Peace Council, expressed a view echoed by many delegates, saying groups such as Islamic State are nurtured and tolerated by imperialism. He argued that the instability created by jihadists in the region is in the interests of imperialism because it gives them a pretext for their war aims.

A delegate from the Youth of Communist Party of Turkey argued that the “Arab Spring” and protest movements from the Middle East to Europe have served the interests of imperialism and capitalism, another common view among delegates. As an example, he pointed to mass protests in Turkey in 2013 demanding political rights and an end to government repression and attacks on the Kurds.

Fifteen delegates led by the Communist Youth of Syria attended. They argued for support for the Bashar al-Assad regime there, which they described as leading a war against imperialism.

“Intervention by Washington and other imperialist powers has created conditions that have helped fuel the wars in the region,” said Rebecca Williamson, representing the Young Socialists in the U.S. “But Washington is not the source of the increased resistance toilers have mounted against dictatorial regimes or national oppression, nor of Islamic State and other reactionary jihadi forces.”

She pointed to the need to support popular protests like those against the Assad regime that swept Syria beginning in 2011, demanding political rights, and support Kurdish victories against Assad and IS.

“Today we can organize solidarity with growing fights by workers and small farmers the world over resisting the effects of the slow burning capitalist depression,” she said. “The biggest obstacle facing the toilers is the capitalist rulers of their own countries.”

There was unanimous backing for WFDY’s long-standing support for the Palestinian people’s fight for national rights. At the same time, delegates from Palestine and elsewhere in the Middle East engaged in sharp debate over which political course to pursue today.

Delegates also united in backing struggles for the self-determination of Western Sahara and Puerto Rico.

The largest representation came from Latin America, the Caribbean and Europe, with smaller delegations from Asia and the Middle East as well. A newly elected General Council met and re-elected the Cypriot communist youth organization EDON to hold the position of president and the UJC to hold the general secretary post.[3]

Prep for Festival of youth and students conducted all over world

On October 15-16, 2016, in the capital of Namibia – Windhoek – passed the Second international preparatory meeting for the XIX World Festival of Youth and Students. Within the Namibian meeting were discussed the details of the discussion program of the World Festival of Youth and Students, logistics and criteria for selection of participants, as well as the elaboration level of the National Preparatory Committees (NPCs) in different countries of the world.

The program of the Festival states that each day of the Festival of youth, in accordance with the traditions of the festival movement, will be dedicated to one of macro regions of the planet (America, Near East, Asia and Oceania, Europe, Russia as the host of the event), their specificity and key spheres. To each day will be assigned the crosscutting theme, which will unite thematically all panel discussions, conferences and seminars.

Among these topics of the day - questions of cultural cooperation, international security, education, science and environment, IT; issues related to employment of young people, ecology and others. The program themes were formulated according to the 17 Sustainable Development Goals of the UN, aimed, inter alia, at eliminating of poverty on the planet, saving the resources of the Earth, welfare for everybody.

The final version of the program will be approved during the Third meeting of the International Preparatory Committee in March 2017 in Sri Lanka. By this time, in addition to the discussion part, is expected the full elaboration of cultural and sports components of the Festival.

Within the Preparatory meeting the representatives of the WFDY direction also presented the report about creating NPCs in different countries of the world. By today are created 27 NPCs on all continents participating in the Festival. In the nearest future will begin work at least another 20 NPCs. Exactly on them will fall the main challenge of promotion and popularization of the Festival in their countries and forming national delegations. Till the end of this year the NPCs will be created all countries of the world that will send young people to the Festival of 2017 in Sochi.

The conference was attended by representatives of the World Federation of Democratic Youth direction (WFDY), member organizations of WFDY from more than 30 countries of the world (including the USA, Jordan, Brazil, New Zealand, Vietnam, the Republic of South Africa and others), the Presidium of the Russian National Preparatory Committee (NPC). Honorary guests of the meeting were the Ambassador Extraordinary and Plenipotentiary of the Russian Federation in the Republic of Namibia Alexander Hudin and the Vice President of WFDY (1981-1987), the President of the Federation of Peace and Accord Victor Kamyshanov.[4] 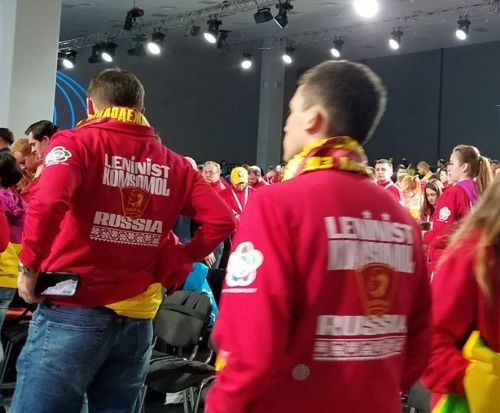 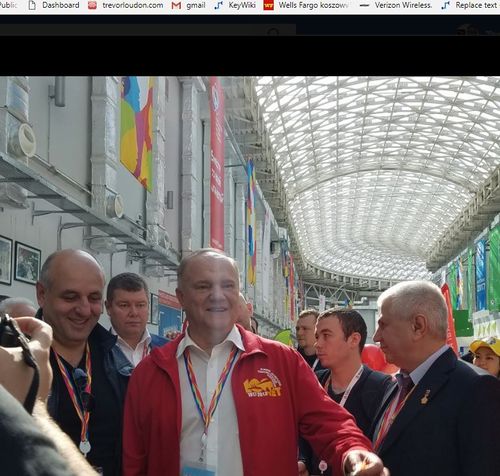 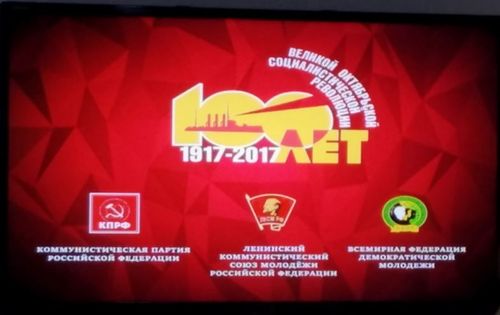