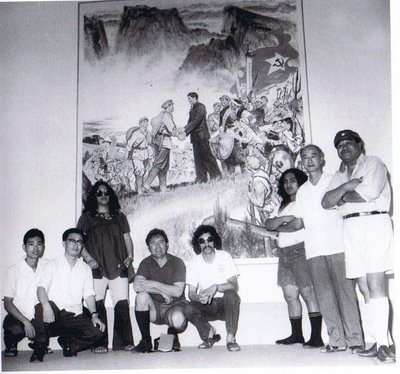 In September 1973 the then pro-Chinese, Communist Party of NZ was sent a delegation of Maori workers to visit the People’s Republic.

The five delegates were:

The purpose of the visit was to visit Chinese minority groups. It was clearly designed to show the Maori delegates that socialist China had solved its minorities problems, while “capitalist” NZ was still oppressing its indigenous peoples.

The CPNZ’s “Peoples Voice” of September 12 1973 published a photo of the delegation and commented;

“Under the old regime in China, the many minorities fared badly. Han chauvinism was fostered both under the Empire and the Kuomingtang as a political weapon to keep the non-Han Chinese in subjection and to exploit them to the full.

Only with Liberation did they come into their own and achieve full freedom and the right to settle their own affairs. All this has happened in recent living memory and the visiting Maoris should receive a vivid impression of the difference for minority peoples who had once lived under a corrupt class system and now live in one where the socialist system insists on equal rights for all.”

“We were guests in a low key way of the government of the PRC, with all expenses paid by them…Our itinerary was worked out mainly to have look at racial minorities.

They had our trip planned, with the exception of Thibet, to see minority states in northern China…(we)visited Soochow, Shanghai, Peking, Sian, Yenan and several cities in the autonomous region of Inner Mongolia.”

On his return from China, Willie Wilson gave an interview to the Victoria University student paper “Salient”. It was reprinted in the Maoist organ, “The Paper” in June 1974.

Wilson was described as Vice-chmn of Te Kotahitanga O Ngati Whakaue, a HART member and involved in “race relations work in Kaingaroa”. No mention was made of his Communist Party membership.

“Before I went to China I never had this hard-line attitude. I thought that this society was a bit racist but not totally… after being to China and seeing how the minorities are treated, how they are permitted to organise and run their own affairs, I was convinced. . . Minorities in China today enjoy a far more fortunate existence than Maoris in NZ“.

Wilson went on to be one of NZ’s most enthusiastic racial activists until he left the Communist Party around 1988.

Tame Iti is probably NZ’s best known Maori activist. He was a member of the Communist Party of New Zealand for many years, as least as late as 1988.

Hone Tuwhare helped found the radical “Maori Writers and Artists Association” and participated in the Maori Land March of 1975. He was expelled from the Communist Party in 1978, but remains a socialist to this day.

Timi Te Maipi went on to be active in CORSO and marae based politics in the Waikato. In the late ’90s he was electorate secretary for NZ First MP, Tuku Morgan.