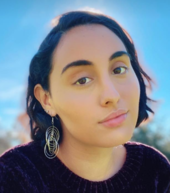 Valentina Beron is a Tallahassee activist. In a relationship with Ezekiel Greenwood.

Zachary Schultz July 5, 2020 Tallahassee, FL - On July 4, over 70 students protested in front of the Westcott administration building at Florida State University to demand the removal of the statue of Francis Eppes, a large Leon County slave-owner who had funded the Confederacy. The protest was called by Tallahassee Students for a Democratic Society (SDS), who also issued demands for the removal of Eppes from the criminology building and segregationist Doak Campbell from the stadium.

“Taking down the statue of a racist slave owner is the bare minimum that FSU could do for our community but especially out of respect for our Black student body,” said Valentina Beron, incoming SDS president. “As long as the statue of Francis Eppes stands at FSU, it represents the culture of white supremacy that is still deeply ingrained and being upheld by this institution today.”

“Francis Eppes used money from his slave-catching militia to fund one of the first police departments in the country, TPD. To this day TPD continues to subjugate Black people, most recently with the murders of Mychael Johnson and Tony McDade,” said Regina Joseph of the Tallahassee Community Action Committee.[1]

Satya Stark-Bejnar March 11, 2020 Tallahassee, FL - In honor of International Women’s Day, Tallahassee residents attended a panel discussion on the origins and impacts of the socialist holiday.

Regina Joseph of the FRSO and president of the Tallahassee Community Action Committee (TCAC) shared a short video on the history of the day and facilitated a panel of five leaders representing over ten active local organizations.

Each panelist shared their personal and organizational history of organized resistance - local, statewide, and national, and spoke on a range of questions and ideas, including how to combat racism, sexism and other bigotries within activist spaces.

“You gotta check those homophobic and transphobic comments [that you hear] in your spaces... and study! You gotta read!” Delilah Pierre asserted.

Survivors told their stories of being assaulted on campus and SDS not only took them seriously but made it their campaign for the whole year. As Beron listed the organizations co-sponsoring to organize a march in April on the topic, Dream Defenders’ Marie Rattigan spoke up to add Dream Defenders to the list. That was the first of a burst of support, cooperation and solidarity to result from the International Women’s Day event. Campus organizers for Bernie Sanders’ campaign from FSU and FAMU enjoyed first contact with one another and pledged mutual support and cooperation; FRRC Chapter Leader Paula Hill assured everyone in the room, “If you’re a woman, gay, transgender, whoever you are, however you present, if you’re out with me, you’ve got protection!”; and all in attendance were invited to an upcoming public hearing on a locally researched and LGBTQIA+ composed Ordinance to Ban Conversion Therapy in Tallahassee.[2]