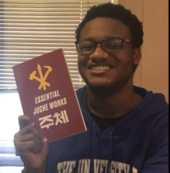 Ahmad Issa and Hala Issa stood at the intersection of Cooper Street and Young Avenue for a Free Palestine rally July 17, 2021.

Demonstrators gathered at the heart of Cooper-Young Saturday, July 17, to express solidarity with Palestine and support for “the people of Palestine in their quest for freedom.”

Memphis Voices for Palestine, along with the Memphis chapter of the Freedom Road Socialist Organization/FightBack!, led a march down Cooper Street with several dozen protestors holding signs that read “Zionism Equals Violence” and “Free Palestine.”

“We are here to oppose the state of Israel and to oppose Zionism,” said [[|Tre Black|Tori Black]], leader of the Memphis chapter of Freedom Road. “We are a group that supports a one-state solution, and we demand an end to U.S. aid to Israel.”

Chanting “Palestine must be free,” the protestors were greeted by honks from supporters and the occasional jeer from objectors.

One protestor, who would only be identified as Yahkov F., carried a sign that read “My Jewish values teach me to oppose apartheid.”

Speaking at one point before the crown on a megaphone, Yahkov said, “As a Jewish person and as a member of Never Again Tennessee, we categorically denounce the actions of the Israeli state as an apartheid state that is cleansing and segregating the Holy Land.”

Never Again describes itself as “a Jewish-led mobilization against the persecution, detention, and deportation of immigrants in the United States.”

“It’s not about Judaism,” said Omar Shluman, a protestor who had wrapped himself in the Palestinian flag, “it’s about Zionism. There are Jewish people who support us, and they come out and tell the truth no matter what.”

“We aren’t trying to be against anybody,” Shluman said. “We just want to live in peace and we want everybody to be safe and to stop killing our children.” [1]

June 2020 city workers removed signs proclaiming "Black Lives Matter" and "Defund the Police." They were originally placed on the fence in front of Memphis City Hall.

The signs are back up after they were taken down. Protesters say the removal is against their free speech.

"Mayor Jim Strickland as you say ordered the signs to be taken down," said Memphis Liberation Party Chair Tre Black. "The city workers came and they told us what was going on and that an agreement was reached. They were going to cut down the signs and let us keep them."

Black is one of many protesters who have been camped out in tents, occupying the city hall plaza for the last fourteen days.

"What we did in all of our genius we put them back up. We're going to be putting all of them back up here," said Black.

"It's our position that this is a content based restriction on freedom of speech in a public place and it's a complete violation of our first amendment rights," said Jan Lentz, the co-chair of Memphis Democratic Socialists of America.

Lentz says her organization along with the Poor People's Campaign are behind the protest.

"It was clear that they were told to take down only the political signs that we had put up and not the other signage," said Lentz.

A list of demands include defunding harmful policing, investing in youth, education and transit along with passing '8 Can't Wait,' which are 8 police policies.

On Monday, the group Memphis Nonprofits Demand Action gathered in front of city hall calling for a reallocation of some police funds to programs and education.

In a response Mayor Jim Strickland stated that the city will not be defunding the police.

"We are out here because we believe in public transportation and full housing and full employment and we're going to fight until those things are realized," said Black.[2]

May 28, 2020 Five people were arrested Wednesday night during a protest against police brutality in midtown Memphis.

According to police, 21-year-old Katherine Pace was arrested for assault on an officer. An affidavit says she hit the officer in the back of the neck as he spoke to another protester on Union near McLean.

Four other people were taken into custody for refusing to clear the road or other criminal behavior, police say.

The demonstration began around 7:30 p.m. Wednesday just outside the WMC Action News 5 building on Union, which is across the street from MPD’s midtown traffic division. Officers responded soon after where they say people were blocking traffic.

Shelby County Commissioner Tami Sawyer tweeted another protester, Tre Black, was also arrested during the protests. He was eventually released from police custody.[3]