Template:TOCnestleft Tomislaw Michalak is a Detroit Michigan activist. He is a FIST organizer.[1]

Tom Michalak, was in 2011, a member of the Young Communist League.

In 2011 Tom Michalak was involved in Occupy Detroit. 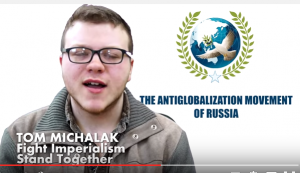 Tom Michalak went to Moscow, February 2015, as part of a small delegation of peace activists from the United States. Our goal was to demonstrate that among working people of all countries, cooperation is possible and in our best interests. The other delegates were Oscar Hernandez Santoyo of Milwaukee, an immigrant rights activist with “Youth Empowered in the Struggle” and Joe Iosbaker, of the Rasmea Defense Committee and the Committee to Stop FBI Repression.

The host during our stay in Moscow was Alexander Ionov, president of the Anti-Globalization Movement of Russia. This is not a homogenous organization representing one ideological current. Some of its members subscribe to Korean socialism and some are “Putinists,” that is, champions of the Russian president, among other tendencies. The underlying current among the membership is staunch opposition to Western imperialism and the belief that all nations have the right to self-determination.

On the wall in the group’s office are framed photographs of Hafez and Bashar Al-Assad of Syria, Kim Il Sung of socialist Korea, Hugo Chávez of Venezuela, Fidel Castro and Che Guevara of Cuba, Moammar Gadhafi of Libya and Omar Torrijos of Panama — all political leaders that U.S. imperialism has demonized.

The trip was paid for by the Anti-Globalization Movement of Russia.[3] 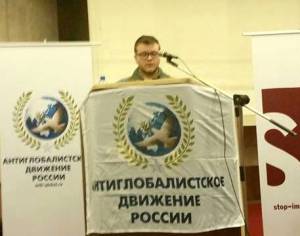 Detroit FIST organizer Tom Michalak addressed the Anti-Globalization Conference in Moscow on February 24, 2015. He spoke on the history of NATO, its neo-colonial character, its advancement eastward following the overthrow of the USSR, the US/EU-backed coup in Ukraine, and the struggle between the various political forces within the Ukrainian junta:

It is truly an honor and a privilege to come from my home in Detroit, USA, to speak to you all today. This year as we celebrate the 70th anniversary of military and political defeat of German nazism at the hands of the various brave peoples of what was then the USSR. We also have passed the one-year anniversary of the US/EU-backed coup in Ukraine and the ouster of elected president Viktor Yanukovych.

I first met Joe Iosbaker last year at an anti-war conference in Chicago last year put on jointly by Workers World Party, Freedom Road Socialist Organization, Fight Imperialism – Stand Together, and the American Party of Labor. I was bussed in from Detroit to help provide security, because leading up to the event, the organizers received threats from the local ultra-nationalists in the Ukrainian community, many having immigrated to the US after the defeat of nazism in 1945. The fascists surrounded the building, numbering from 40-50. They pounded on the doors attempting to break in, blasting the Ukrainian anthem on speakers, waving the UPA battleflag, and wearing matching blue shirts with the Ukrainian trident. Some had infiltrated the meeting before we shut the doors, and they had to be removed by force, which I was proud to have had a hand in. Fascism is not only a problem on Russia’s doorstep but on the contrary, it is a world problem.

As I speak to you now, the heroic resistance to the fascist junta in Kiev are making incredible gains in Donbass, after surrounding an estimated 6,000-7,500 US-equipt Ukrainian soldiers. Forces associated with the Donetsk and Lugansk People’s Republics have reached Mariupol and have captured Debaltseve, despite the the weapons provided and the threats made by the NATO imperialists. NATO, chiefly the US, has shown that there is no corner of the world in which they are not prepared to unleash hell on earth wherever their interests are at stake, whether it be in the former Yugoslavia, Afghanistan, Iraq, or Libya.

There are many who consider themselves anti-imperialists who are in lockstep with the NATO imperialists, placing blame entirely on Russia. They say that the fascist parties make up a slim minority in the Ukrainian government and that groups like Pravy Sektor were merely a fringe on the ground during the Maidan. Of course this is true, for even in the infamous leaked phone call in which Ukraine’s new leaders were hand-picked between assistant Secretary of State, Victoria Nuland, and Ukrainian ambassador, Geoffrey Pyatt, the leader of ultra-nationalist Party Svoboda, Oleh Tyahnybok, was not appointed as head of government. In the conversation she said of Tyahnybok, to “let him stay out and do his political homework”. The fascist elements do currently however hold most key positions in matters of police and national security. On top of this, right-wing gangs patrolling the streets of junta controlled Ukraine dealing out extralegal beatings and murder is not an uncommon phenomena in junta controlled Ukraine. I say this to highlight the struggle within the right-wing Ukrainian regime itself between forces explicitly loyal to the demands of US such as Yatsenyuk, Poroshenko, and others as opposed to hardline nazis such as Dmitri Yarosh.

From the beginning, it was the militants of Pravy Sektor who physically pushed Yanukovych out of office. Today, it is the fascist volunteer battalions such as Azov and the Pravy Sektor-organized National Guard who are the most willing to carry out the so-called “Anti-terror” operation. The threats made by the fascists early last year for the resignation of Interior Minister Avakov, the death of nationalist militant Sasha Bilyi, and the recent declaration of Pravy Sektor that they will carry out their assault on Donbass regardless of any agreement reached by Poroshenko’s government only highlight the struggle between the two main elements of the junta. As time goes on these contradictions will only deepen, and one side or the other will prevail, as they cannot coexist in perpetuity. There are many who anticipate a second Maidan in the coming spring lead entirely by the fascist elements, feeding on the discontent of deterioration of conditions that are a result of the coup the fascists helped to create, and channeling that potentially revolutionary energy into counter-revolutionary despair.

The defeat of these elements is of the utmost importance to progressive forces around the world, and Europe in particular. A victory for nazism in Ukraine emboldens the nazis such as Golden Dawn in Greece, English Defense League, and others. A defeat for nazism on the other hand, is a victory for those who seek a world without racism, poverty, and war.

Comrade Hamel opened with a presentation on how and why the Bolsheviks were able to achieve military success as well as the support of the diverse, multinational oppressed classes in Russia. Hamel highlighted the Bolsheviks’ unwavering commitment to dismantling feudal autocracy and the capitalist system and their staunch stance against opportunism in the social democratic movement of the era. 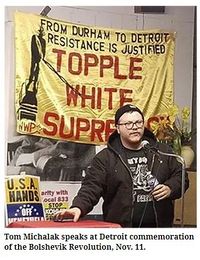 A presentation by comrade Tom Michalak explored the many successes of the Bolshevik Revolution and the Soviet project. He covered a breadth of information, from the harrowing sacrifices that led to the defeat of fascism in World War II, to an incredible increase in life expectancy undone by the counterrevolution in the 1980s and 1990s.

Founding member and comrade Deirdre Griswold, of the New York City branch of WWP, called in to speak about what led to the dismantling of the USSR. She detailed the conditions experienced by those living in the Soviet bloc as a result of 74 years of unyielding aggression from the United States and its imperialist partners.

Comrade Mond Jones, youth member and final speaker, emphasized the importance of celebrating, commemorating and reflecting on the Bolshevik Revolution. He condemned the conditions the global masses face living under capitalism at a dead end. He brought further attention to capitalism’s many contradictions and to the associated struggles facing workers in Detroit and abroad.

“These may be obvious problems,” said Jones, “but the Bolshevik Revolution gives us a template for implementing solutions.”[5]