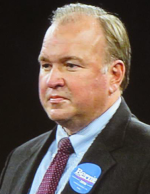 Tom Fiegen is an Iowa politician.

Tom Fiegen is a Berniecrat, a term used for those democrats (generally) running for office who have expressed support of former presidential candidate Bernie Sanders.[1]

Many of these candidates believe that voters are fed up with how the corporate capture of the party has pulled it to the right. “The Democratic Party has been Lucy with the football and the voters have been Charlie Brown,” says Tom Fiegen, a candidate for Senate in Iowa. “Democrats have pulled the football away too many times, so the voters say, ‘Nope, I am not going to be tricked again. I am not going to have you lie to me and tell me you’re on my side, and then when I send you to D.C., you vote for the TPP or you vote for the Keystone Pipeline.’ ”

Tom Fiegen saw how this played out in Iowa. “In the conventions I went to,” he says, “there was probably 30 to 40 years difference in age between Bernie supporters in one half of the room and Hillary supporters in the other half of the room.” Fiegen himself has endorsed Bernie Sanders, and you can hear in his voice the same passion that has animated so many young people: “We are idealists. … We want a better world. We think we can achieve it. We’re willing to basically throw our bodies in front of the bus to do that.”

Fiegen was reared on a family farm in southeastern South Dakota as the eldest of eleven children. He worked on the family farm, raising cattle and hogs, until he graduated from high school; he then began taking classes at South Dakota State University while farming and launching a grain bin construction business with his brothers.

In 1979, rather than continuing at SDSU, Fiegen went to work for the National Farmers Organization in West Fargo, North Dakota. In 1980, he briefly worked for a South Dakota ethanol fuels company before returning to the NFO to work in grain merchandising. He also worked as an apprentice electrician before returning to collegiate study.

Fiegen graduated from Kansas State University in 1984, majoring in speech and agricultural economics. He subsequently earned a Master of Arts degree in economics and a law degree, both from the University of Iowa.

Fiegen is a bankruptcy lawyer specializing in farms and small businesses; he has operated his own legal practice since 1996.

In 2004 Democratic Socialists of America targeted local races where control of state houses were up for grabs and where statewide electoral-vote outcomes hinged on successful local district turnouts.[2]

In Iowa, Tom Fiegen—who says his politics are in the tradition of the radical lay Catholic Worker Movement,—is attempting a return to the Iowa state Senate (District 40)..”

We reported on the candidates that DSAers were supporting in the last issue of Democratic Left. How did they do?

Declared Democratic candidates for US Senate in 2016 were; 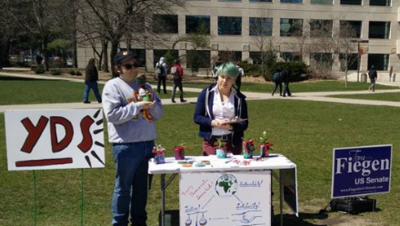 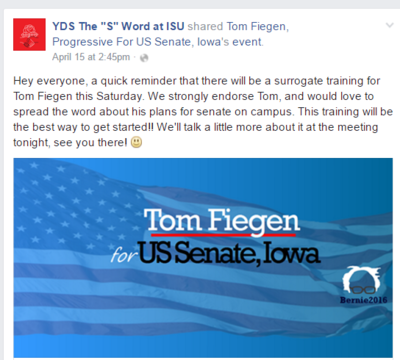 Hey everyone, a quick reminder that there will be a surrogate training for Tom Fiegen this Saturday. We strongly endorse Tom, and would love to spread the word about his plans for senate on campus. This training will be the best way to get started!! We'll talk a little more about it at the meeting tonight, see you there! 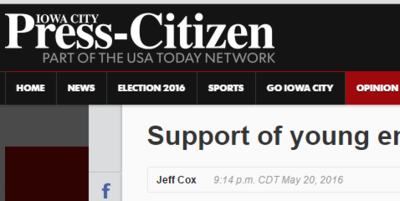 Johnson County Democrats have an opportunity to revitalize a moribund Democratic Party by voting in the June primary for three county supervisor candidates who endorsed Bernie Sanders: Rod Sullivan, Kurt Friese and Jason T. Lewis. They represent the future of the Democratic Party, a party that says “yes we can” rather than “no we can’t.”

We can also vote in the primary for the only Democratic candidate for U.S. Senate who endorsed Sanders, former state Sen. Tom Fiegen of Cedar County. He has a distinguished record of campaigning against factory farming and corporate agriculture. Unlike his opponents in the Democratic primary, he does not take campaign contributions from corporations, corporate political action committees or other campaign committees that accept corporate funding. Like Sanders, Tom Fiegen is not for sale. 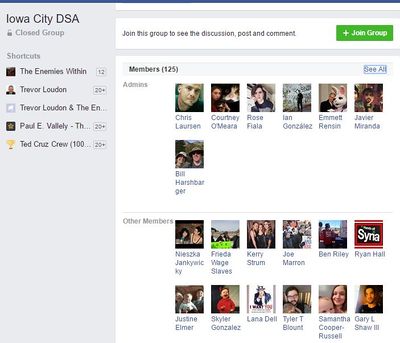 In September 2017 Tom Fiegen was a member of the Democratic Socialists of Iowa public Facebook group.

Tom Fiegen was a member of Quad Cities Democratic Socialists of America Public Facebook Group as of April 30, 2017.[4]