Rev. Timothy McDonald, III is the chair of African-American Ministers in Action. He is the Senior Pastor at the First Iconium Baptist Church, as he has been since May 1984.[1]

Letter to Trump about 'Religious Liberty'

Timothy McDonald signed a letter to President Donald Trump[3] dated April 4, 2019 requesting affirmation that religions other than Christianity and Judaism "make outstanding contributions to the United States". The letter was initiated by "three chairmen of U.S. Conference of Catholic Bishops":[4]

September 7, 2006, the National Capital Immigration Coalition held a rally on the National Mall. The protest was billed by immigration rights groups as a post-Labor Day demonstration to show Congress that undocumented workers still wanted an immigration reform bill that would allow them to work in the country legally. Turnout for the march was lower than expected with several organizers attributing low numbers of attendees to the fact that in the four months since the first marches, competing immigration bills had stalled in the House and the Senate.

People for the American Way 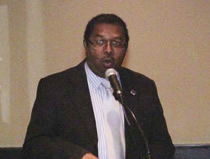 23 Arrested over Bill to Repeal “Stand Your Ground”

In February 2014, for its fourth week of action, Moral Monday Georgia continued to tackle the issue of the state government’s enabling gun violence through the “Stand Your Ground” law and new legislation nicknamed the “carry anywhere” bill, HB 875, which allows concealed weapons in churches and bars, and minimizes fines for carrying on campuses. LOB Feb10

A Feb. 5 committee hearing on Sen. Vincent Fort’s bill to repeal Stand Your Ground was adjourned by Chairman Jesse Stone before any of the many supporters present (except for one expert witness) could testify. In response, 23 Moral Monday protesters accepted arrest on Feb. 10 for refusing to leave Senator Stone’s office, demanding that the hearing on SB 280 be continued so the public could be heard.

The bail fund, was organized through the Georgia Civil Disobedience Support Fund. This fund is facilitated by representatives from the Atlanta Economic Justice Program of the AFSC, Atlanta Jobs with Justice, and Metro Atlanta Democratic Socialists of America.[9]