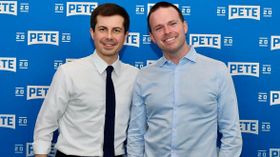 Thomas Zimmerman is Deputy Lead for National Security Personnel and served as "a Special Assistant to the President for Presidential Personnel" for Joe Biden.

Before working for Joe Biden, Thomas Zimmerman was Director of Programs at the Pacific Council. Previously, he worked on Barack Obama’s 2008 campaign and oversaw foreign policy research for his 2012 reelection campaign. He worked served as Special Assistant to the National Security Advisor at the White House and coordinated foreign policy research for Pete Buttigieg’s presidential campaign.[1]

Thomas Zimmerman will be vetting Joe Biden's National Security appointments. He is currently a Master’s Candidate at the Fletcher School of Law and Diplomacy. Thomas Zimmerman was the Director of Programs at the Pacific Council on International Policy, where he oversaw programming for Council members and the general public.

He started his career working in Kabul, Afghanistan, with American Councils for International Education. After working on Barack Obama’s 2008 Presidential campaign, Thomas joined the Pakistan Desk at the Department of Defense before moving to the White House to serve as Special Assistant to the National Security Advisor. In 2012, he managed the national security and foreign policy research portfolio for President Obama’s reelection campaign.

On Sep 24, 2020, Thomas Zimmerman moderated a panel discussion on the topic "lessons and threats from other countries regarding U.S. election security".[2]

A Local-to-Global webcast on lessons and threats from other countries regarding U.S. election security. Featuring: David Brody, Counsel & Senior Fellow for Privacy and Technology, Lawyers' Committee for Civil Rights Under Law. David Brody leads the Digital Justice Initiative. He is Counsel & Senior Fellow for Privacy and Technology. He focuses on issues related to the intersection of technology and consumer privacy, free speech, hate group activity, government surveillance, and racial discrimination. Camille Francois, Chief Innovation Officer, Graphika Camille François works on cyber conflict and digital rights online. She is the Chief Innovation Officer at Graphika, where she leads the company’s work to detect and mitigate disinformation, media manipulation and harassment. Camille was previously the Principal Researcher at Jigsaw, an innovation unit at Google that builds technology to address global security challenges and protect vulnerable users.

Kristen Clarke of the Lawyers' Committee for Civil Rights Under Law was to be a part of the discussion, but she was not able to attend.

Moderator: Thomas Zimmerman, Director of Programs, Pacific Council on International Policy Thomas Zimmerman oversees programing for Council members and the general public. After working on Barack Obama’s 2008 presidential campaign, Thomas joined the Pakistan Desk at the Department of Defense before moving to the White House to serve as Special Assistant to the National Security Advisor. In 2012, he managed the national security and foreign policy research portfolio for President Obama’s reelection campaign. Background: As U.S. states brace for the upcoming November election, the threat of a pandemic, voter suppression, and foreign interference looms large. These challenges are not unique to the United States, but the country already struggles amongst its peers in voter turnout and ease of voting. With less than 40 days to go until election day (as of the date of this event), what is the outlook for U.S. election security? How have cyber warfare tactics from actors like Russia, China, and Iran progressed and tested U.S. voting systems? What lessons can the U.S. follow from other developed countries to prepare its election security for the future?

Out in National Security 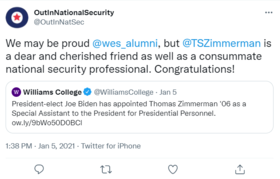 As part of the Atlantic Council’s commitment to constructive leadership and engagement, it is important to elevate the voices and the profiles of these LGBTI Americans to meet the global challenges we all face. Together, Out in National Security and the Atlantic Council take great pride in recognizing the caliber of talent LGBTI Americans offer their country. At a time when LGBTI Americans’ rights remain under threat, recognizing the rising generation of LGBTI Americans dedicated to the security of the nation and foreign policy is an important step in expanding US leadership and engaging the country in a positive dialogue. Their dedication to leading the United States today and into the future makes that future more secure and helps to ensure the rights of all LGBTI Americans. Together, we honor the contributions of twenty-five LGBTI American professionals in government, think tanks, academia, the military, and non-governmental organizations. They were selected on the basis of their professional contributions and service to their communities."

Q: What has your experience or challenges been as an out LGBTI national security practitioner?

Zimmerman: I have found the need to periodically closet myself, depending on the operating environment, to be taxing. While I make a conscious effort to be out to my coworkers whenever possible, I have found myself in environments (for example, Afghanistan, Somalia, etc.) where being honest with my colleagues about my relationship would put me at risk.

Q: What advice do you have to younger LGBTI Americans interested in Foreign Policy/National Security?

Zimmerman: LGBTI people have a lot to add to security discussions. While at times it can feel inaccessible, you have an opportunity to bring a greatly underrepresented perspective to the conversation and, in the process, help make the world a safer and more just place. You never know when your experiences will allow you to see something nobody else at the table can.

Q: Why is diversity important in foreign policy and national security?

Zimmerman: Diversity is important in foreign policy and national security for the same reason it’s important in all sectors: it ensures a wider range of perspectives and experiences that are essential for good policymaking.

Most recently, Thomas worked at the Center on International Cooperation and as a visiting scholar at the Shanghai Academy of Social Sciences, focusing on Afghanistan, Somalia, and Chinese regional policy. He specializes in the facilitation of Track II dialogues.[4]

The Federal Bureau of Investigation (FBI) has stated that SASS frequently provides cover to intelligence operatives of the Ministry of State Security (MSS). The FBI adds that the MSS "uses SASS employees as spotters and assessors."[5]

Zimmerman has also “hosted an academic salon” alongside Chinese Communist Party adviser Li Lifan on “topics concerning counter-terrorism in Afghanistan and Pakistan, security issues in Central Asia, the US perspective on the One Belt One Road initiative, and security issues in South Asia” at the Shanghai Institute of American Studies (SIAS).

SIAS is funded by the Chinese Communist Party and “provide[s] advisory services to the central government as well as local decision-makers” in China.[6]

Thomas Zimmerman spent six month at Shanghai's Academy of Social Sciences this year to explain China's grand strategy for turning its restive Western Xinjiang region into a hub of regional trade and transport by investing hundreds of billions of dollars in more than 20 countries spread across Eurasia from Indonesia to Denmark.

"China has an interest in building stronger relations with its neighbors. The scale of investment Beijing is currently discussing could have an immensely positive impact in a number of underdeveloped economies," Zimmerman wrote. "This is particularly true in Afghanistan."

In recent years, Beijing has clearly moved to play a bigger role in Afghanistan by backing its investments and economic aid with support for the Afghan peace process and even extending security cooperation to Kabul.

"Chinese experts also emphasize that while there is concern over the current security situation, China remains interested in Afghanistan as a longer-term investment opportunity," Zimmerman wrote.

A key demonstration of this willingness is China's move toward crafting an Afghanistan policy independent of its long-term alliance with Pakistan.

In recent years, Beijing has hosted talks between Afghan officials and Taliban representatives and has encouraged Islamabad to adopt a more positive approach toward Afghanistan by pushing the hard-line Taliban leaders hiding inside Pakistan to join negotiations with Kabul.

"Beijing is implicitly tying its promise of investments to the expectation that Pakistan will play a constructive role in promoting political reconciliation and stability in Afghanistan," the study observed.

After signing $46 billion commitments as part of the China-Pakistan Economic Corridor in April, visiting Chinese President Xi Jinping called on Islamabad to gear toward a more positive role in Afghanistan.

"China will work with Pakistan to advance the reconciliation process and smooth transition in Afghanistan and work together to build a new type of international relations of win-win cooperation," Xi told Pakistani lawmakers.[7]

Zimmerman is a graduate of Williams College and the Fletcher School.