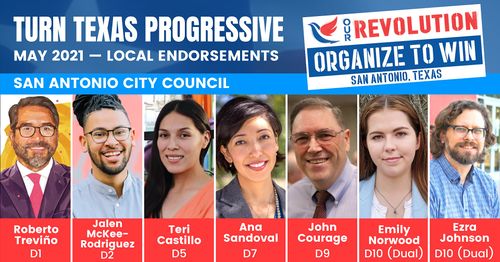 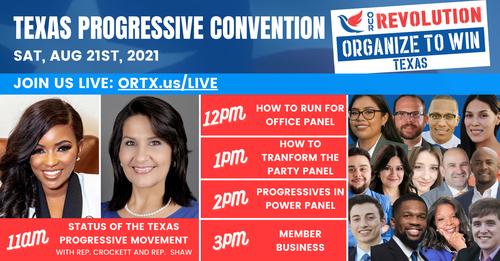 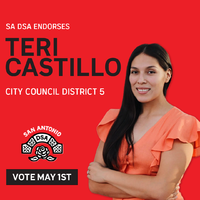 In 2021 Teri Castillo was endorsed by the San Antonio Democratic Socialists of America.

Our Democratic Socialist slate of candidates doesn't need the backing of big business, developers, or the bosses, just the power of the people. At our 2021 Local Convention, our membership voted to endorse members Jalen McKee-Rodriguez and Teri Castillo for their City Council campaigns in districts two and five. With the help of our chapter they were elected to San Antonio City Council in 2021. We continue to support Jalen and Teri through their candidacies and are proud to have our members representing us in local government.

In addition, we endorsed the San Antonio ISD School Board slate running on the platform The Schools our Students Deserve. Through that slate we were able to assist in electing Sarah Sorensen to SAISD district one.[2]

The following statement is from Michelle Tremillo, Executive Director of the Texas Organizing Project (TOP), in response to the group’s success in San Antonio’s municipal runoff elections:

“Last night, San Antonio voters made clear they are hungry for change at City Hall. We are thrilled to see Jalen McKee-Rodriguez and Teri Castillo, progressive champions for their respective districts, claim victory, and TOP is proud to have helped power their campaigns to decisive runoff wins.

“Over the span of four weeks, our voter engagement program made more than 31,000 door knocks, made over 15,000 phone calls, and sent nearly 55,000 text messages to voters in City Council Districts 2 and 5 for the runoffs, helping set the stage for last night’s results.

“By leading with issues that directly impact our everyday lives and taking no community member for granted, we are building progressive power on the ground in our neighborhoods to move San Antonio forward.”[3]