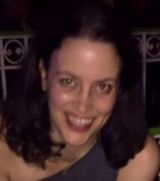 Tascha Van Auken is a Brooklyn activist. She is the Asst. Director of Casting and Training for Blue Man Productions.

Sunday Closing Plenary BEYOND CAPITALISM: WHERE TO GO FROM HERE; 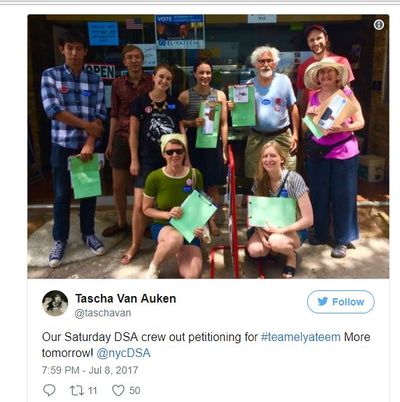 According to Brooklyn Democratic Socialists of America Electoral Working Group coordinator Tascha Van Auken, who’s coordinated the group’s efforts within the Khader El-Yateem New York City Council campaign, the DSA has sent 25 to 30 volunteers to Bay Ridge per week to help canvas and door knock since El-Yateem gained the group’s endorsement. And like El-Yateem, she said that “residents of the 43rd District don’t tune out when they heard the dreaded “s” word”.

“As far as the DSA goes, this district went for Bernie, so when people hear ‘Democratic Socialists of America’ I think people associate that with ‘Bernie Sanders’ and have a positive reaction to it.”[2]

In March 2018 Tascha Van Auken was involved with the Democratic Socialists of America Electoral Committee. 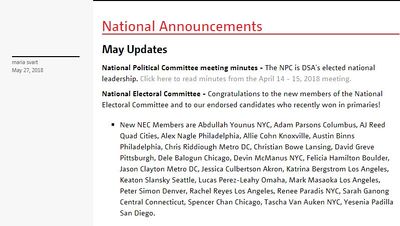 Alexandria Ocasio-Cortez had a campaign machine of her own, an outside group known as the Democratic Socialists of America. In the avalanche of coverage of Ocasio-Cortez’s win, the logistical support and manpower she received from the DSA has drawn relatively little notice. But the group is poised to make its presence felt in the midterms.

More than 100 volunteers from the DSA had flooded the streets of the 14th Congressional District, which includes parts of Queens and the Bronx, for months.

In Ocasio-Cortez’s race, DSA organizers say their cadre of volunteers knocked on over 13,000 doors to drum up enthusiasm for her bid. That level of support is significant in primaries that traditionally see low turnout. Ocasio-Cortez defeated Crowley with a little over 15,000 votes in a district with a total population of more than 700,000. The district is overwhelmingly Democratic, and she will almost certainly win the seat in November’s general election, barring completely unforeseen factors.

Vigie Ramos Rios, manager of Ocasio-Cortez’s campaign, was careful to point out that other organizations also backed her bid, including Brand New Congress and Justice Democrats. Still, Ramos Rios said the impact of the DSA’s work in the field was clear.

“They were strong supporters,” she said of the DSA. “There were areas they canvassed that came out for us in spades.”

And the teams of volunteers in the street wasn’t the only way DSA made its mark on Ocasio-Cortez’s campaign. Ramos Rios is a DSA leader who was recommended to Ocasio-Cortez by another member of the group who previously ran a race with its backing. The campaign’s treasurer was former DSA national director Frank Llewellyn, who came on board after Ramos Rios asked the organization if it knew someone who could help the campaign with its finances. In addition, two DSA members were behind Means of Production, the company that made a video for Ocasio-Cortez that was released last month and, in the words of Business Insider, went “completely viral,” earning over 300,000 views in one day and helping drive nationwide attention to the campaign. According to Naomi Burton, one of the company’s co-founders, they were drawn to Ocasio-Cortez by the organization’s endorsement and because of “her unapologetic socialist platform and articulation of working peoples’ needs that caught our attention.”

In many ways, Ocasio-Cortez’s was the ideal example of a model the DSA is trying to replicate around the country with unabashed socialists from diverse, unconventional backgrounds taking on establishment figures with the logistical support of a robust organization.

Many of the new DSA members, like Ocasio-Cortez herself, cut their political teeth working for the Sanders campaign. As they joined, they drove the organization toward getting more involved in campaigns. In January 2018, the group launched a “national electoral strategy” formally committing it “to develop and run viable openly socialist candidates for office (either in Democratic primaries or as independents.)” It is one of the group’s primary focuses, along with a nationwide push for a Medicare for All health care program and for support of labor movements.

The strategy document made clear the full scope of the DSA’s ultimate ambitions.

“This work will be critical to the development of a genuine alternative to the neoliberal third-way politics of the corporate establishment within the Democratic Party,” the document reads.

And this is all taking place in a group where some members are so far to the left they don’t even agree with the idea of electoral politics.

Aaron Taube, who coordinated the DSA’s field operation for Ocasio-Cortez, said the group’s volunteers went to work for her the day after she received its endorsement in April.

“A DSA endorsement is not just a rubber stamp. We’re not just saying you should vote for these people,” Taube says News. “When DSA endorses you, it’s like, yeah, we’re going to knock 13,000 doors. … We’re going to mobilize.”

Taube is representative of the supporters who come on board once a candidate has the group’s approval. He’s 29 years old and, like Ocasio-Cortez, who was a bartender before running for office, was a relative political novice, who was a journalist turned freelance marketer (he previously worked with one of the authors of this story in 2014). He’s also a pro wrestling fan who said he discovered the DSA in the more liberal quarters of the sport’s Twitter community after being “radicalized” by Trump.

“That was the only way at the time that was apparent to me to build power,” Taube explained. “It was like, well, you can have a revolution or an election and I’m not ready to learn how to shoot a gun yet.”

Taube officially joined the party the day after Trump’s victory and ended up volunteering for a DSA-backed city council candidate in Brooklyn, Khader El-Yateem. During that campaign, he was schooled in political organizing skills.

“What those two races were — and I don’t want to suggest that we don’t care about winning, our goal is to win these races 100 percent — but what they also served as last year were amazing laboratories for building independent field operations … comms operations, and data operations. … We had to form a PAC,” said Van Auken.[3]