According to Eithne Silva on February 9 2020 students and community organizations gathered on the University of South Florida (USF) campus to protest recent acts by the university and the government to limit the free speech of progressive voices. Tampa Bay Students for a Democratic Society (SDS) attended to demand that the university lift their suspension and drop their charges. USF placed a suspension on Tampa Bay SDS for protesting against the university’s budget cuts.

“Administration has been constantly getting in the way of protest and then suspended SDS until the fall semester on hypocritical charges,” says Laura Rodriguez, a member of Tampa Bay SDS, “I think it is so incredibly irresponsible for USF administration to try and disband an organization that has had such a vital role in the Tampa Bay area.”

Of the many speeches prepared for the event only one was given before USF administration told the police to arrest the protesters for trespassing. Five people, most of whom are students, were detained and held in police vehicles for over half an hour. Many of the police officers were not wearing masks when in the cars with the detained protesters.

“This was about intimidation and suppression,” Simon Rowe, a member of Tampa Bay SDS who was arrested, says of the actions. “The police walked me past the same place on campus where they escorted Kaitlyn Bennett's security away from her event in October. Bennett's team was given water, I and four other people were put in handcuffs.” Rowe was referencing last semester in which notorious right-wing internet personality Kaitlin Bennett filmed a video on campus at USF. Despite drawing a large crowd, she was allowed to leave of her own accord.

“USF and the police demonstrated another act against the voices of students,” stated Laith Hader of the USF chapter of Students for Justice in Palestine (SJP). “I was there to give a speech about USF's record of suppressing voices of pro-Palestine activists. Many of those who speak out against the Israeli system of apartheid and genocide are being doxed, fired from their jobs, investigated or interrogated by the state, and are falsely framed as anti-Semitic, all while neo-Nazis and white supremacists are given their ‘free speech’ without any repercussions from the state or its institutions.”

Members from Tampa Bay Community Action Committee (TBCAC), Party for Socialism and Liberation (PSL), and Tampa People’s Protest were also in attendance to stand in solidarity with progressive students and raise awareness about HB1/SB484, a bill proposed by Florida Governor Ron DeSantis to severely limit the right to protest in the state. Members of TBCAC and PSL were among those arrested.

“SDS has always brought issues to the table which USF admin have tried to keep hidden under the rug,” said Rodriguez.[1]

The Defend Progressive Free Speech protest took place in front of the Marshall Student Center (MSC) at noon. The MSC Events Response Team, alongside UP, was at the scene and asked the group to disperse. In the end, Taylor Cook, James Kramer, Hailey Ostwalt, Elizabeth Rowe and Jordana Cummings were arrested for trespassing and were issued a notice to appear in court, according to the press release. All individuals were released “on their own recognizance,” according to the press release.

Of the five arrests, Cook and Rowe are currently enrolled students while Kramer, Ostwalt and Cummings are not, according to Dean of Students Danielle McDonald. Many of the groups in attendance will join a statewide mobilization to Tallahassee, Florida’s state capital, on March 2 to protest against the bill.[2]

On March 21 2019 University of South Florida (USF) students and Tampa community members gathered to commemorate the lives of the victims of the Christchurch New Zealand mosque shootings. Tampa Bay Students for a Democratic Society (SDS) hosted the event and laid out 50 flowers on the lawn in front of the Marshall Student Center to represent each victim of the attack.

“The bottom line is that white supremacy and xenophobia exist here in the U.S. too, that’s why this vigil is important. Mosques are destroyed here, but few of these attacks are addressed by the media or the public, and justice is rarely served. We need to stand up and fight against these political issues before more attacks happen,” said Tampa Bay SDS member, Sanjukta Bhattacharjee.

Tampa Bay Students for a Democratic Society connected the event in New Zealand to the political situation in the United States, particularly at USF where there has been recent activity by white supremacist organizations like Patriot Front, along with racial slurs being spray-painted in campus dorms.

“The work done to prevent white supremacist attacks in the U.S. is weak, especially under the Trump administration, so if we want these attacks to stop, the responsibility is ours to stomp white-supremacy out of our communities. The only way to start is through collective organizing, by showing white-supremacists and the government, alike, that we do not accept their conduct,” said Tampa Bay SDS member, Kareem Hessen.

The event finished with the crowd chanting, “Islamaphobic, anti-gay, Patriot Front go away,” and SDS re-committing to the fight against white-supremacy on USF Tampa campus and in the U.S. government.[3] 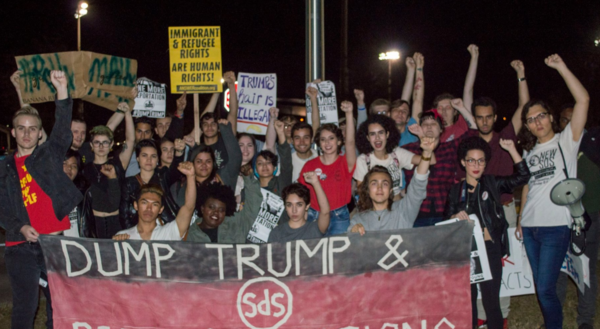 A few of the members of Tampa SDS, flyered and had a banner drop in support of #AffirmativeAction — with Ronnie Riots, Elizabeth Kramer, Gage Lacharite and Danya Zituni.

Tampa Bay Students for a Democratic Society public Facebook group funtioned from circa 2010 to 2015.