Sylvia Orduno is a Michigan activist. She is an organizer with the Michigan Welfare Rights Organization in Detroit, MI, has been in the forefront of the struggle to stop the shutoffs of water to low-income families in Detroit for years. She works with low income residents and community leaders on solutions for affordable water and housing to address these human rights crises.

Speakers for a New America 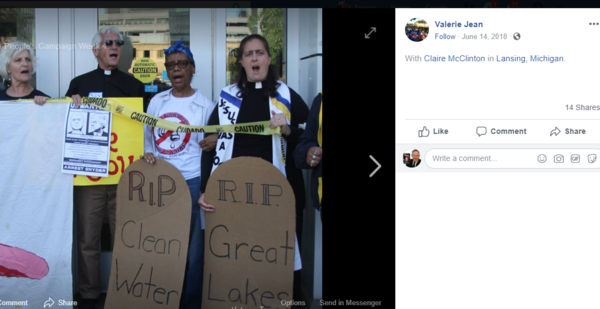 The event that triggered the arrests in front of the MDEQ in Lansing, MI, that blocked the doors to the building.

“We blocked all the doors (and eventually the parking lot) of the Michigan Department of Environmental Quality (MDEQ) headquarters, plus surrounded the building with crime scene tape because of environmental concerns,” said Rev. Bill Wylie-Kellermann, one of some 30 people arrested. Concerns included the role of the MDEQ in the Flint water poisoning, oil spill threat of Enbridge’s Line 5, and permitting the expansion by US Ecology and Nestlés in the Great Lakes.

The action was part of the Poor People’s Campaign: A National Call for Moral Revival. “This contributed to the largest focused and coordinated campaign of civil disobedience in US history . . . the MDEQ needs to make public health the priority, not corporate profit,” said Wylie-Kellermann.