Sydney Ghazarian, aka Sydney Kat from Los Angeles, is a founding member of the Democratic Socialists of America’s Climate and Environmental Justice Working Group.[1] She is also a climate organizer and an advisory board member for The Trouble.

As part of this effort, this Convention will endorse the Red Deal, launched by comrades in The Red Nation, a radical anti-capitalist Indigenous liberation group, and its principles on the fight for non-reformist reforms. As described by The Red Nation, “The Red Deal is not a counter program of the GND. It’s a call for action beyond the scope of the US colonial state. It’s a program for Indigenous liberation, life, and land—an affirmation that colonialism and capitalism must be overturned for this planet to be habitable for human and other-than-human relatives to live dignified lives.” At the end of this Convention, the GNDCC will be tasked with initiating a more direct working relationship between DSA and The Red Nation. The GNDCC will make direct connection with The Red Nation, dedicate one person to serve as the main point of contact, and collaborate with the comrades on joint actions, statements and local, national and international campaigns around indigenous liberation and climate justice.

The Green New Deal has arrived. Thanks in part to organizational pressure applied by the Sunrise Movement and policy proposals made by DSA member and congressperson Alexandria Ocasio-Cortez, concerns about climate change and the policies needed to combat it have seized public imagination. In the 2016 presidential campaign, Hillary Clinton and Donald Trump were not asked a single debate question about climate change. Now however, Democratic Party presidential candidates face a litmus test as to whether they have a clear vision of how to curb the worst parts of the Earth’s climate catastrophe. Cory Booker, Kamala Harris, Elizabeth Warren, and others have publicly announced their support of Green New Deal legislation and have enshrined it as a core component of their presidential campaigns.[2] 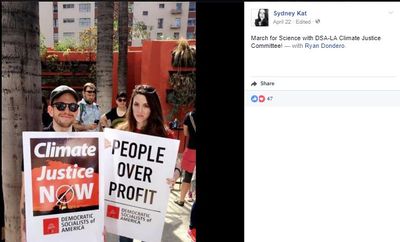 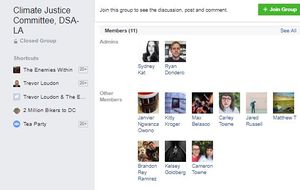