Template:OtherUses Susan A. Davis is a Democratic member of the United States House of Representatives, representing the 53rd district of California. 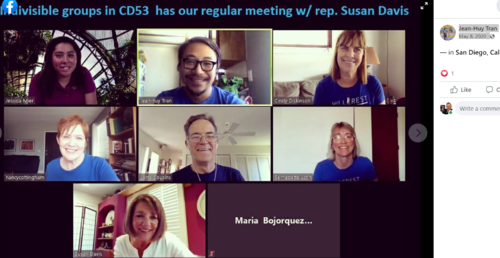 Today, the coalition of Indivisible groups in district 53 had our regular meeting with our Congresswoman Susan Davis. We discussed about Medicare For All & immunization for asylum seekers.

The Council for a Livable World, founded in 1962 by long-time socialist activist and alleged Soviet agent, Leo Szilard, is a non-profit advocacy organization that seeks to "reduce the danger of nuclear weapons and increase national security", primarily through supporting progressive, congressional candidates who support their policies. The Council supported Susan Davis in his successful House of Representatives run as candidate for California.[1]

In May 2013, Susan Davis was listed as an associate member the of the Congressional Asian Pacific American Caucus.[2]

. Her personal connection to Israel, forged decades ago when she lived as a volunteer on Kibbutz Degania Bet, has helped to make her one of Capitol Hill’s most consistent champions for Middle East peace. [5]

In 2013 Progressive Democrats of America assigned activists to deliver their material to almost every US Congressman and Senator, Dawn Dershem, was signed as the contact for Rep. Davis.[7]

Davis has been supported by EMILY's List during her campaigning.

In the 113th Congress, 50 members of the House of Representatives belonged to the New Democrat Coalition, including:[8] 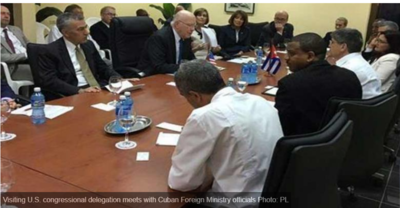 "During the meeting they discussed matters of interest to both countries," the Cuban government said in a statement.

The delegation, led by Democratic Senator Patrick Leahy of Vermont,comprised of Senators Ron Wyden of Oregon and Michigan's Gary Peters, along with representatives Kathy Castor of Florida, Jim McGovern of Massachusetts and Susan Davis of California.

Leahy has been one of the most active politicians inside the Capitol in advocating the improvement of US-Cuba relations, which defrosted somewhat in 2014 under Barack Obama after half a century of tension.[9]

The lawmakers are reportedly on a "fact-finding trip" concerning changes in the Cuba policy introduced by the Trump administration following alleged health incidents involving US diplomats in Havana.

"A pleasure to welcome U.S. Senator Patrick Leahy and the congressional delegation (…) Enjoyed a constructive and candid dialogue," Fernandez de Cossio posted on his Twitter account. The Cuban diplomat is said to have told the visitors during the meeting that no evidence has been found by either Cuba or the US regarding the cause of those incidents.[10]

Rep. Susan Davis, D-San Diego, signed on to the Green New Deal on March 2019, following months of phone calls and protests outside her office by local environmental groups.

Activists in the region with SanDiego350, Indivisible and Sunrise Movement have ramped up pressure on local members of Congress to support the climate change proposal since February.

“I definitely think we’re making a difference,” said Masada Disenhouse, executive director of SanDiego350, who help organize numerous protests outside of Davis’ San Diego office. “There’s no question that Representative Davis is cosponsoring the Green New Deal as a direct result of our campaign.”

Davis said that pressure by activists was not a factor in her decision.

“As my constituents know, I always take a deliberative and thoughtful approach to legislation,” she said in an email. “It was important to me to study the bill and consult with experts and colleagues, and listen to my constituents carefully before signing onto such a broad proposal.”

The congresswoman posted the news on Twitter after she cosponsored the resolution, which calls on the federal government to draft legislation aimed at wiping out greenhouse emissions by 2030 while creating jobs in the renewable energy and other sectors.[11] 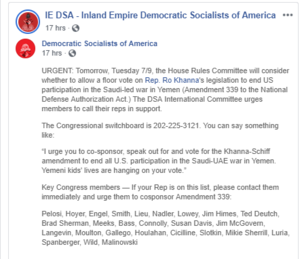