Shelley Berkley is a Democratic member of the United States House of Representatives, representing the 1st district of Nevada.

The Council for a Livable World, founded in 1962 by long-time socialist activist and alleged Soviet agent, Leo Szilard, is a non-profit advocacy organization that seeks to "reduce the danger of nuclear weapons and increase national security", primarily through supporting progressive, congressional candidates who support their policies. The Council supported Shelley Berkley in his successful House of Representatives run as candidate for Nevada.[1]

An evening celebration was held at the Newseum in Washington, D.C. Congressman Barney Frank acted as the Master of Ceremonies and, in the process, received a lifetime achievement award from former Rep. Tom Downey, a member of the Council’s Board of Directors. The Robert F. Drinan Peace and Human Award was presented to former Representative and PeacePAC Chairman David Bonior and the late Edith Wilkie, a longtime advocate and leader for peace and justice.

Shelley Berkley for Congress has been a client of Robert Creamer's Strategic Consulting Group.[3] 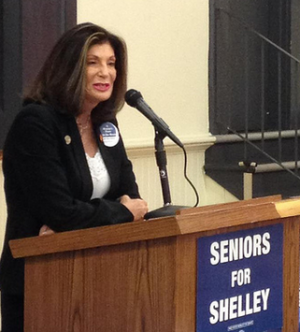 Berkley has been supported by EMILY's List during her campaigning.