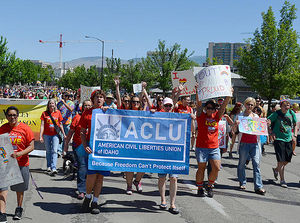 Shaakirrah Sanders is Secretary, serving on the Board of Directors of the American Civil Liberties Union of Idaho Foundation based in Boise, Idaho.

American Civil Liberties Union of Idaho Foundation awarded $100,000 over six months. ACLU of Idaho Foundation "will conduct outreach, strengthen protections, and empower immigrant, refugee, Muslim, and indigenous communities in Idaho who are feeling threatened in a culture of rising hate."

Open Society Foundation's Communities Against Hate initiative "supports organizations that are grappling with the spike in hate incidents in the United States over the last several months" as explained by a white paper dated June 22 2017.[1]

"Our local grants, which range from $15,000 to $150,000, aim to support, protect, and empower those who are targets of hateful acts and rhetoric, and to bolster communities’ resilience and ability to prevent such incidents from occurring in the future. We are making grants on a rolling basis, and there are a few more in process. A complete list will be published on the Open Society Foundations website when all of the grants have been issued."