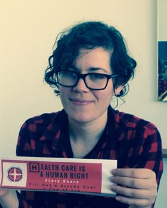 Sarah Lazare is involved with the Southern Maine Workers Center. She previously worked at Iraq Veterans Against the War. She is a staff writer for AlterNet and a former staff writer for Common Dreams.

Sarah Lazare was in 2017, web editor at In These Times. She comes from a background in independent journalism for publications including The Nation, Tom Dispatch, YES! Magazine, and Al Jazeera America. Her article about corporate exploitation of the refugee crisis was honored as a top censored story of 2016 by Project Censored. A former staff writer for AlterNet and Common Dreams, Sarah co-edited the book About Face: Military Resisters Turn Against War.[1]

Studied at University of Illinois at Urbana-Champaign.

Those saying they would attend, on Facebook included Sarah Lazare.[2]