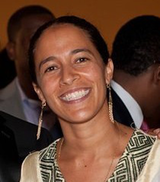 Sara Bissrat Mersha has been Director of Grantmaking and Advocacy at Grassroots International since 2010. She works to build and maintain long-term relationships with partner organizations and social movements led by peasants, indigenous peoples, women, and youth in the Global South. Sara also coordinates Grassroots’ advocacy work, collaborating with other US allies as part of the US Food Sovereignty Alliance and the Climate Justice Alliance. In 2014, Sara joined the Planning Committee of the Movement Generation Justice and Ecology Project.

Born in Addis Ababa, Ethiopia, Sara has spent the majority of her life in the United States and brings years of experience connecting local community organizing (such as with Direct Action for Rights & Equality in Providence, RI) with broader movement building efforts. Sara served as Visiting Faculty in the Ethnic Studies Department of Brown University, and entered a graduate program at Brown’s Center for Environmental Studies in 2009. Since then, she has focused her academic and movement-building work on climate justice and food sovereignty.[1]

Sara Mersha was a Masters student at the Center for Environmental Studies at Brown University, where she focuses on issues of climate justice, climate debt, and food sovereignty on local and international levels. She grew up in Lynn, Massachusetts, and has been living in Providence, Rhode Island since 1993. Sara worked for 12 years in the field of community organizing, as Lead Organizer and Executive Director of Direct Action for Rights and Equality, a grassroots organizing group with a membership base in low-income communities of color. In this role, she led and supported a variety of campaigns including low-wage worker organizing, youth organizing, anti-criminalization, and anti-gentrification work, along with political education and broader movement-building work.

In 2008, she was Visiting Faculty in the Department of Ethnic Studies at Brown, where she co-taught a practicum course on "Strategies, Tactics, and Tools for Social Change.” Sara was a member of the Rockwood Leadership Fund’s 2008-2009 “Leading from the Inside Out” fellowship program. Sara's involvement with national networks has included Jobs with Justice (former national board member), the Right to the City Alliance (current resource ally to the Environmental Justice Working Group), and the Grassroots Global Justice Alliance (current interim co-chair of the Global Well-Being Working Group). [2]

May Day greeting was included in the Special May Day 1999 Supplement of the Communist Party USA's People's Weekly World. Greeters included Sara Mersha.[3]

In 2004, the Rhode Island Labor History Society chose to give an award to Sara Mersha, representing organizations that have been transforming the definition of the labor movement: DARE (Direct Action for Rights and Equality), and Rhode Island Jobs with Justice.

On this night, DARE Executive Director Mersha was greeted with raucous applause from the grizzled veterans of the state's labor past. The crowd at the Casino see her and fellow activists as bearing the torch of real labor idealism.

It was a doubly special night for Paul Buhle, having recently joined Solidarity (of which Sara Mersha was also a member) and sitting next to organizational veteran Ara Dostourian. Buhle had met Mersha some years before, as a student in his oral history class, and already a bit of a legend on campus.

Since DARE first started organizing home childcare providers for prompt payment and health insurance in the early nineties, it has been successful organizing those whom existing unions did not even consider, and developing their own skills to demand more from employers and other organizations.

DARE has also been a strong member of the Rhode Island Jobs with Justice since the coalition began in 1996. With ups and downs along the way, JwJ has successfully brought together progressive community organizations, union, religious and student groups to build power in a grassroots labor movement.

Always diverse, DARE and JwJ have become more global in the background of members in recent years. So it has been no surprise, if a happy observation, to see new faces, new leaders coming forward. Even some of the state's prime labor hacks, never progressive, now look to DARE and JwJ to pump up a sagging labor movement, its failures weighing upon their own eclipsing careers.

Sara Mersha had already begun to meet with Theresa El-Amin, when Paul Buhle encouraged Mersha to make this interviewing her project of the semester. What she learned, as she has related, clarified to her what a role model can be.

Mersha had learned about DARE, from a fellow-student doing work-study there, and met El-Amin. In 1998 she came back to Providence, and to DARE as a staffer, filling in a sense that gap left when her mentor had left town for other opportunities.[4]

"Teach-In on the War"

Sara Mersha is an alumni of the Movement Activist Apprenticeship Program.[7]

In 2008 Sara Mersha of the Direct Action for Rights and Equality, Providence, RI signed an online petition “A Open Letter to Barack Obama on Iran”.[8]

Sara Mersha, Director of Grantmaking & Advocacy, Grassroots International, was a 2008 Rockwood Leadership Institute National Leading From the Inside Out Alum.[9] 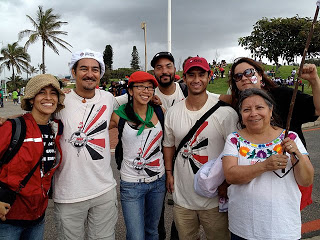 From Durban to Rio+20 and beyond: Stop the 1% from Profiting from Pollution!

NYC. I'm in here. So many rockstars. @OurPower contingent alone is about 4,000 folks, 50 buses from all over. Frontlines of Crisis, Forefront of Change. 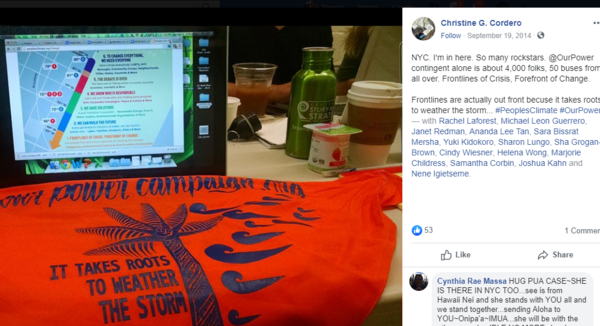 Movement Generation leaders as of December 2015.[12]

It Takes Roots People's Caravan took place in July 2016. Grassroots Global Justice Alliance launched the It Takes Roots to Change the System People’s Caravan from the RNC to the DNC. Nearly 40 community leaders and allies from the US and Honduras traveled in a bus from the Republican National Convention in Cleveland to the Democratic National Convention in Philadelphia, stopping along the way to build with communities in Pittsburgh and Baltimore fighting for environmental and racial justice.