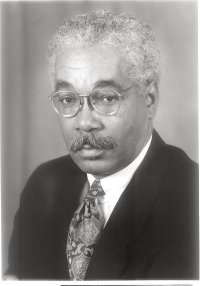 Salim Muwakkil is a Chicago based activist.

In 1987 Salim Muwakhil was on the Board of Directors of the Black Press Institute[1].

"African Americans and the 1996 Elections."

In conjunction with the Chicago Chapter of the Committees of Correspondence, the University of Chicago Democratic Socialists of America hosted a panel discussion on "African Americans and the 1996 Elections." Panelists included Danny Davis, Cook County Commissioner and Democratic Party nominee for Illinois' 7th Congressional District, Barbara Ransby, Chair of the Center for African American Research at DePaul University, and Salim Muwakkil, columnist (for In These Times and the Chicago Sun-Times. Long-time political activist Timuel Black moderated.[2]

The conference was themed "Radical alternatives on the eve of the millenium".

Or "listen to the United States' only independent and socialist congressman", Rep. Bernie Sanders, "dialogue with" Joel Rogers of the New Party and In These Times' ....Salim Muwakkil on independent politics..[3].

In March 1998 “Endorsers of the Call” to found a Black Radical Congress included Salim Muwakkil, Chicago[4]. 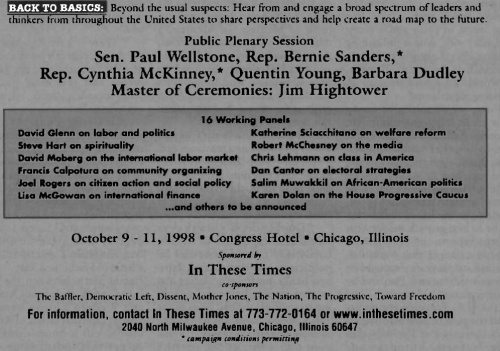 Speakers at the October 1998 Back to Basics Conference in Chicago included;

On April 28 2000, the Sacramento Democratic Socialists of America Local hosted a regional Harrington-Hamer Institute training in media skills and community organizing featuring John Nichols of The Nation and Salim Muwakkil of In These Times.[7]

Speaking with Ayers and Obama

Bill Ayers and Barack Obama spoke together at a public gathering sponsored by The Center for Public Intellectuals & the University of Illinois-Chicago, April 19th-20th, 2002, at the Chicago Illini Union;

"Intellectuals: Who Needs Them?

IV. Intellectuals in Times of Crisis

Experiences and applications of intellectual work in urgent situations.

At the August 2002 18th Young Democratic Socialists Summer Institute and National Convention at the University of Illinois at Chicago, Salim Muwakkil, of In These Times, spoke on Race in America after 9/11[9].

As of 2009 Salim Muwakkil was a Senior Editor of Chicago based socialist journal In These Times.[10]